I hadn’t been planning on an explore at the weekend, but when my wife suggested we visit a certain town I remembered I’d always meant to look for an old tunnel there that I’d read about a few years ago. Fortunately I’d saved the web page so I was able to re-read it and refresh my memory of where I should be looking. It sounded as if it could fit the bill for an explore that was interesting enough to satisfy me, but with very little risk of causing me to miss the birth of my first child due to ending up in a police cell. Excitedly I gathered up my camera, torch and GorillaPod and we were off.

I hadn’t been able to find any information about this tunnel apart from that one five-year-old web page, so I had no idea whether it would still be accessible – being right in the middle of quite a large town, it could easily have been closed off in the mean time. As we approached the site I could see that the gap in the fence mentioned in the previous explorer’s report was now blocked up, but I was able to get round the other side by scrambling up a steep wooded bank and stepping over the mangled remains of another fence, ignoring the nearby “Danger, Keep Out” sign. 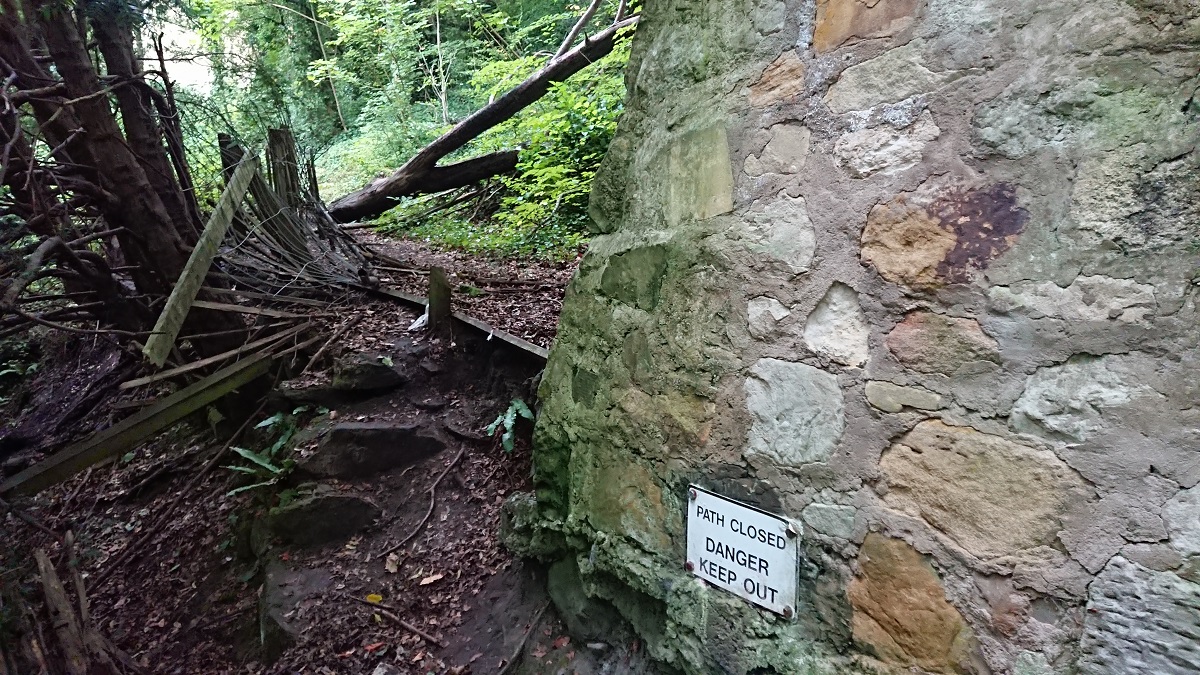 I found myself among the ruins of some old buildings. There was so little left (just chunks of thick stone wall really) that it was impossible to tell what they had once been. After a quick look round, I found the tall, narrow tunnel entrance further up the slope, leading into the base of another stone wall. 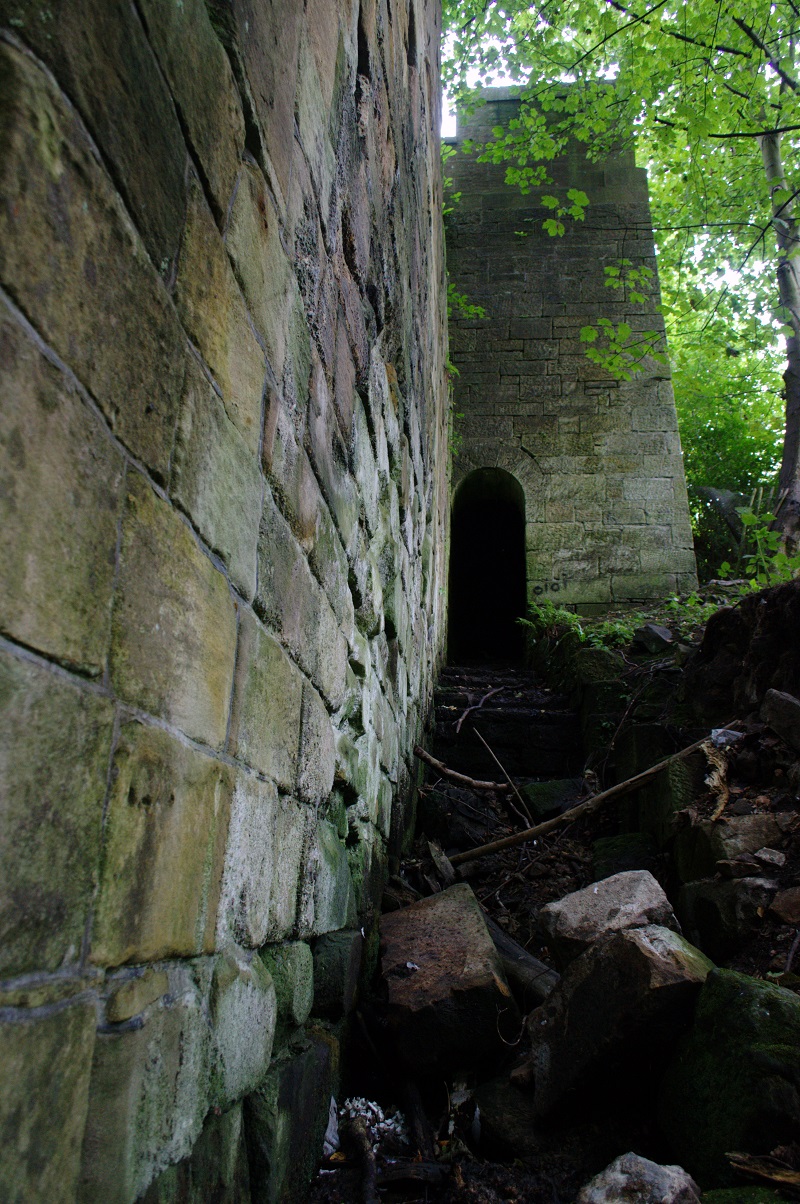 The large “steps” up to the tunnel were actually more like a series of weirs but, although they were very muddy, there was only a little trickle of water actually coming down them. I clambered up, turned on my torch and stepped into the darkness. 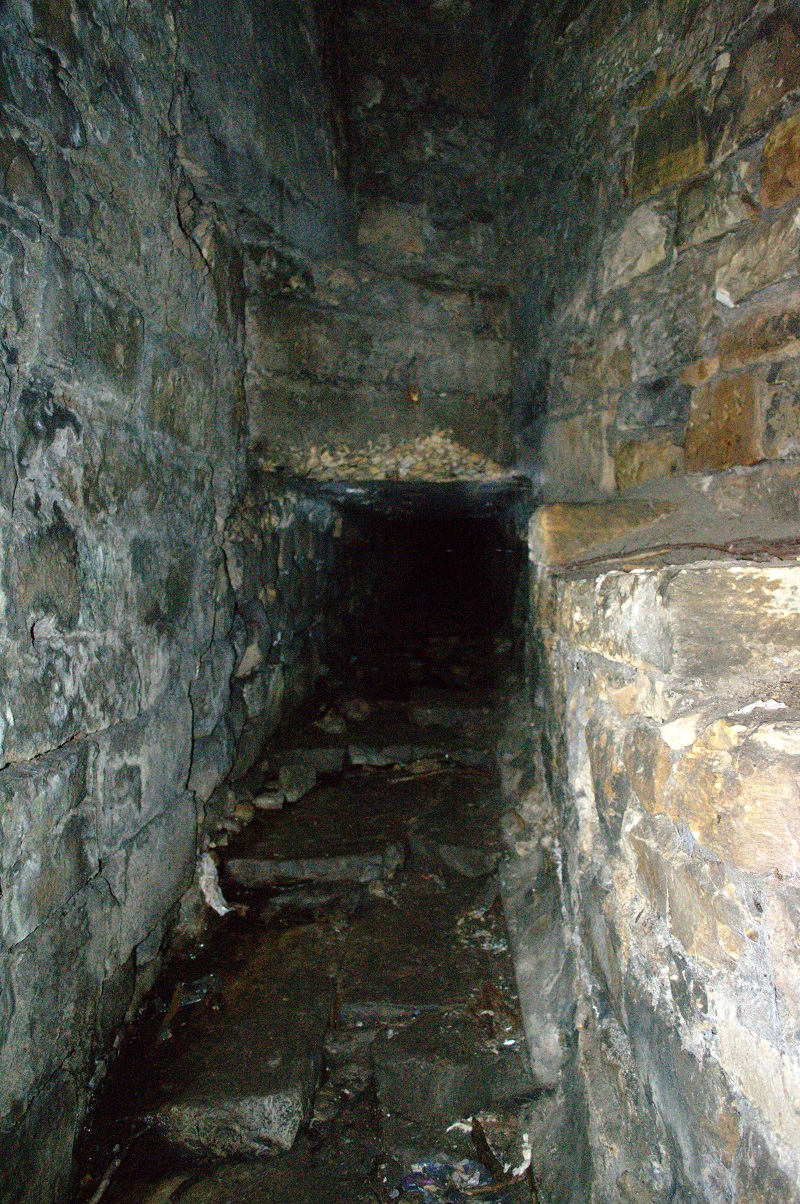 Just inside the portal was a fairly large chamber with a high ceiling. The water channel came down the left hand side of the chamber and to the right was a higher “shelf”. The whole area was littered with a surprising number of discarded items of clothing as well as at least one condom! So I guess I’m not the only one to come to this place for some excitement.

At the far end of the entrance chamber, the tunnel continues for quite a distance, but with a much lower roof. I didn’t go too far into this part, conscious of the fact that I’d left my 39-week-pregnant wife sitting on a tree stump in the adjacent park and that this really wouldn’t be a good time to get stuck anywhere. Instead I contented myself with taking some long exposure photos into the distance and making a mental note to return and explore the rest later, preferably with a friend next time. 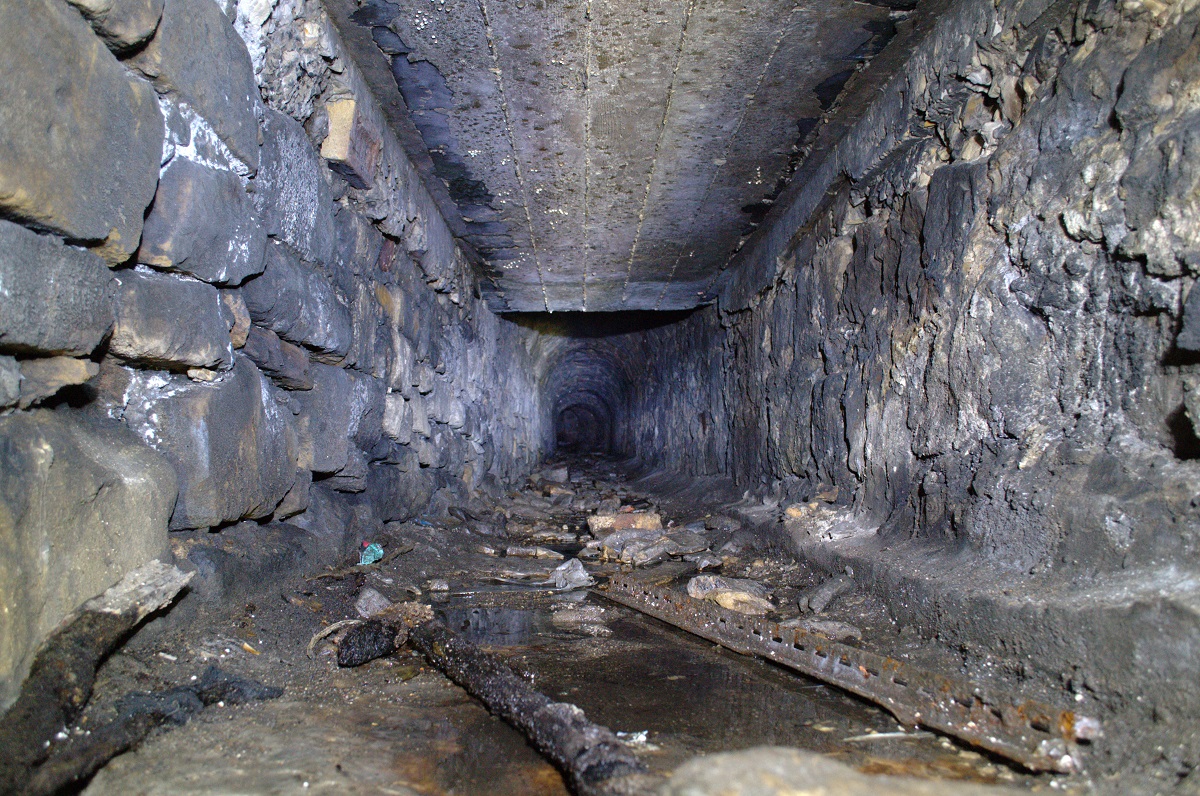 Getting back out to the park took longer than I’d expected as I ended up going back to the tunnel twice after I’d left it: the first time because I realised I’d turned off auto-focus on my camera and forgotten to turn it back on, so I had to go and re-take my last several photos so that they would actually be in focus, and the second time when I noticed my spare SD card had fallen out of my bag. Despite there only being a tiny trickle of water in there, the card had managed to land in it, right between a discarded sock and some interesting looking fungus. Lucky it was in its waterproof case.

I did some more research on this place after getting home, discovering that the ruined buildings were mills and the tunnel originally carried a mill lade. It’s hard to tell for sure, but it appears from old maps that the large “entrance chamber” might have been added later on when part of the lade was covered over to build the monument that now stands up above.