Calling this outing “urban exploration” is really stretching the definition of the term, since the site was in the middle of nowhere and consisted of a cluster of abandoned farm buildings. Maybe “rurex” is the correct word… ? 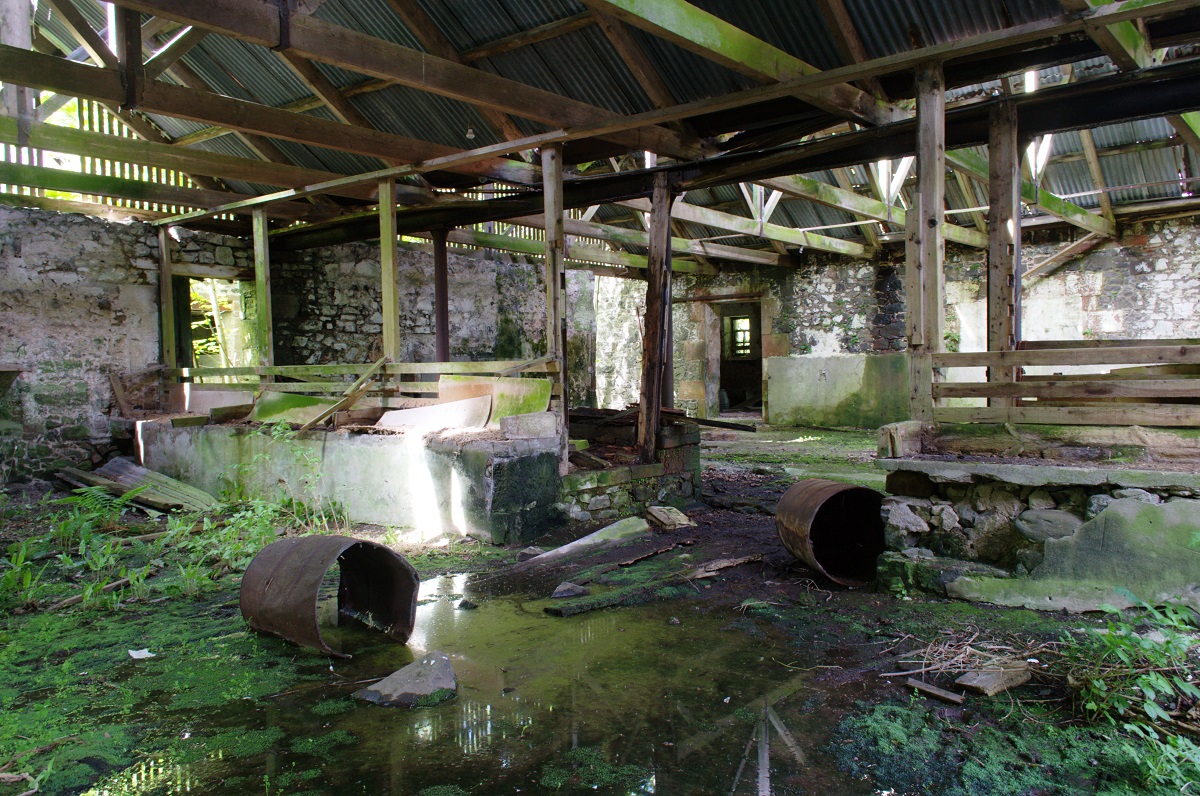 I first noticed some of the abandoned buildings down in the valley below way back in December 2012 when I explored the Glenfarg Tunnels. I nearly went down for a look on that day but daylight was running short and I still had one of the tunnels to do, so I passed them by. It wasn’t until May 2015 that I finally returned to explore them. So after a walk through the nearby tunnels and a few photos in there, we clambered down to the old farmstead to see what we could find. 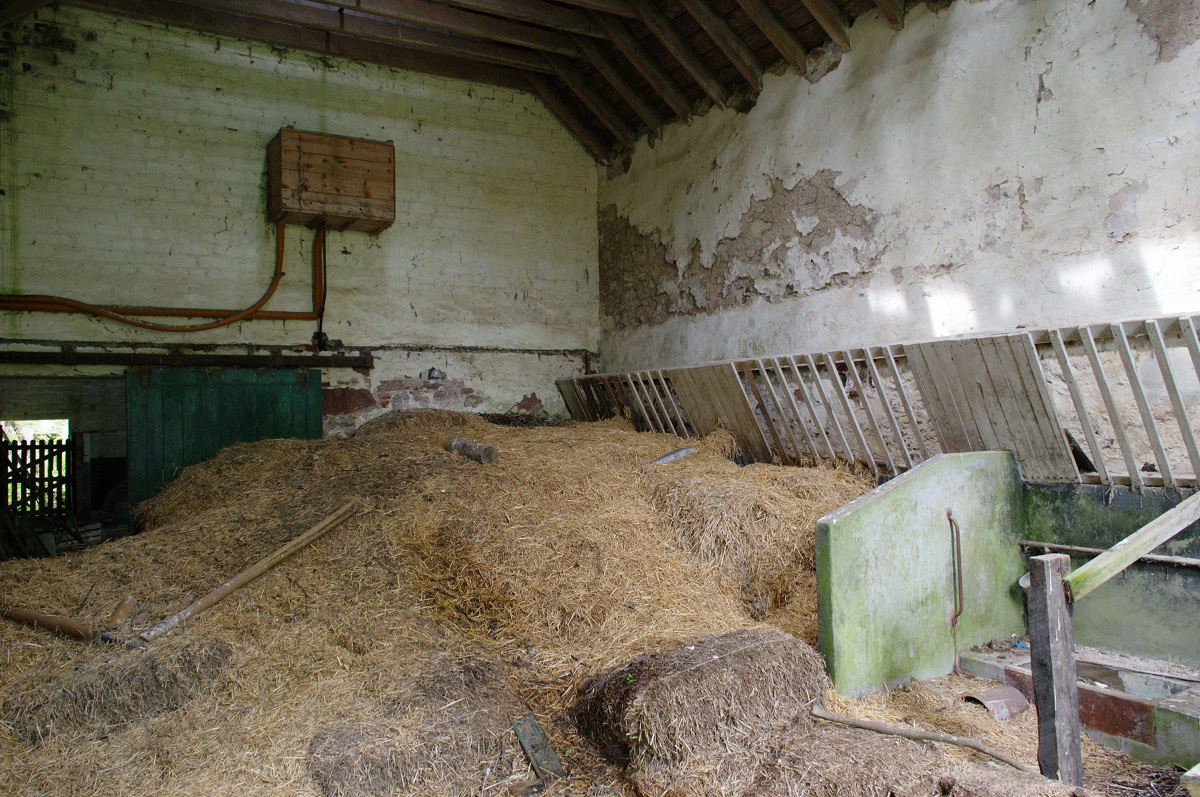 The largest building, which was probably some sort of cattle shed, actually didn’t look too dilapidated. There were even still piles of hay in the room with the stalls, and I started to wonder whether it was really abandoned at all and whether we should maybe get out before we were confronted by an angry farmer wondering what we were doing. But one of our group assured me that it was definitely disused, he’d been here before and it had looked exactly like this for a long time now. 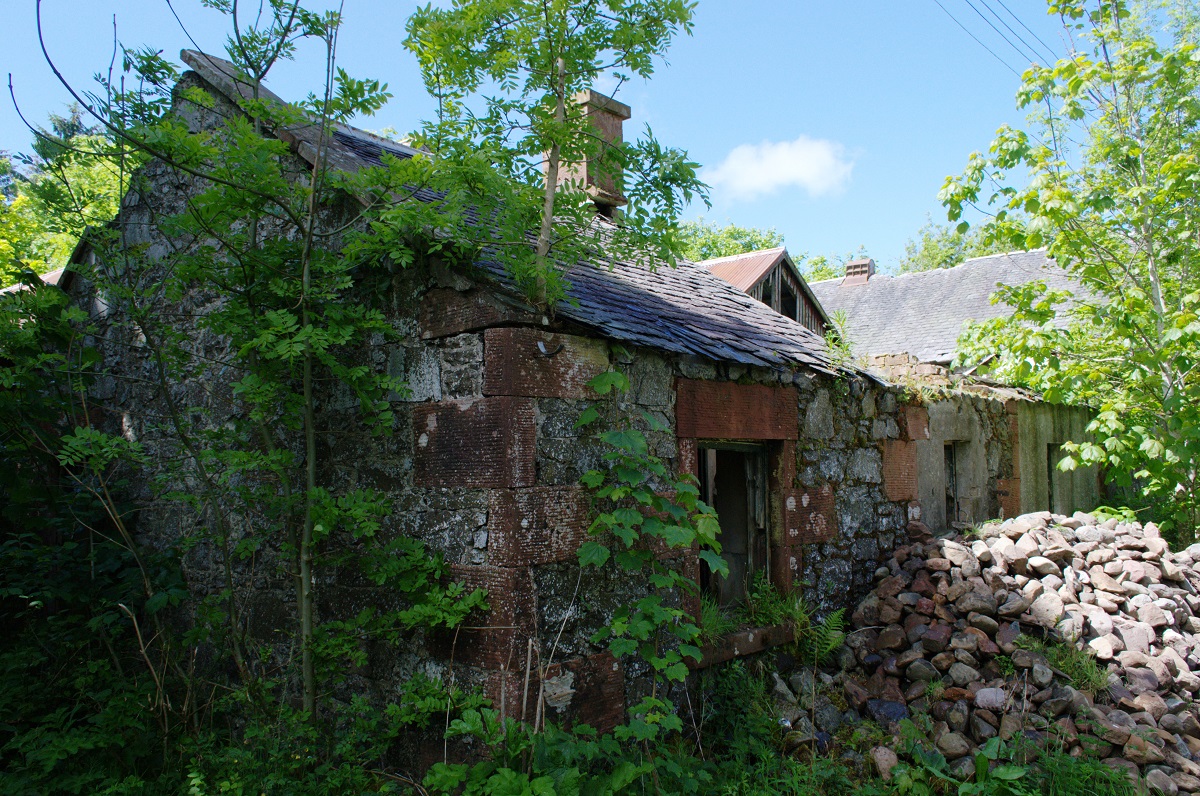 But no such questions came to mind when we visited the farmhouse itself, nestling in the greenery at the other side of a track. The roof had caved in in several places and there were big holes in the walls as well. As I entered what was once the kitchen, I noticed that a large part of the brick chimney had fallen over and was now just resting on timbers in what was once the loft space, so it’ll only be a matter of time before it comes right through. 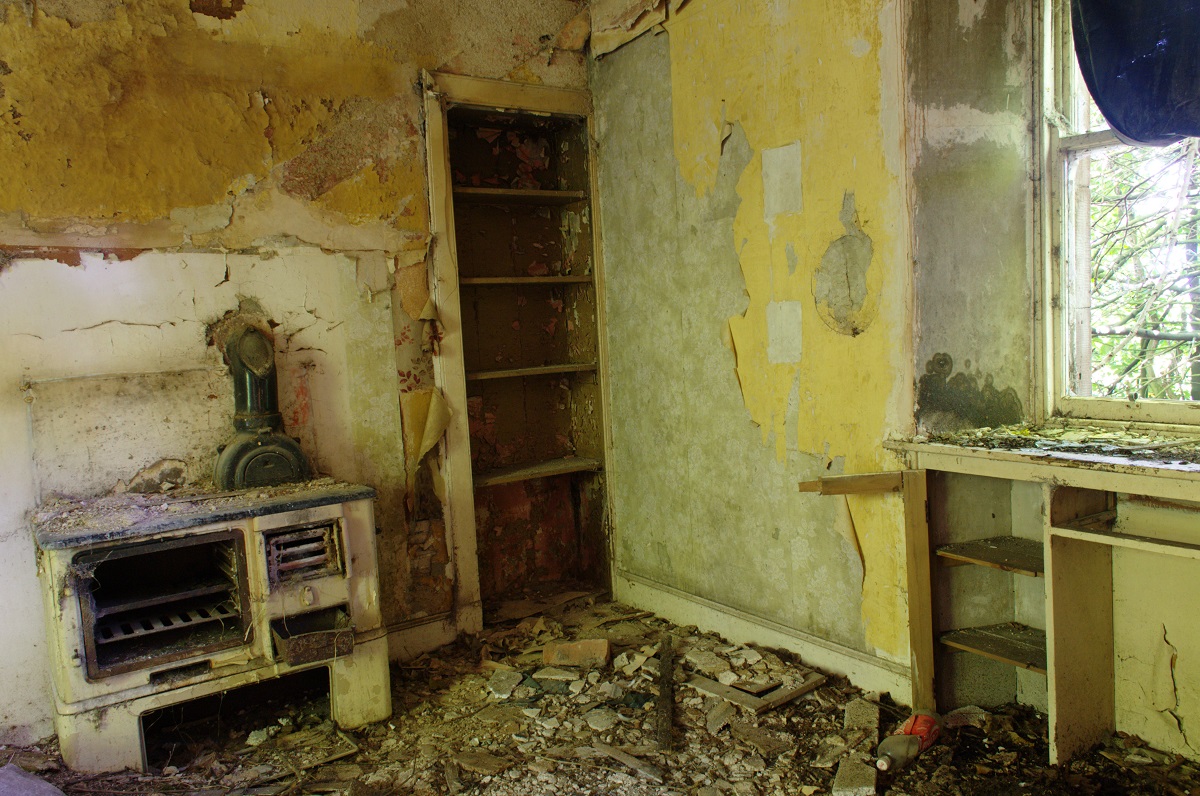 Next door was the bathroom, and next again was a larger room that was probably a bedroom. A hallway led through to the back part of the house, but this section was in even worse condition, with fallen roof timbers lying everywhere and blocking some of the doorways. A few fixtures and fittings remained: the cast iron stove in the kitchen, the toilet (though the cistern was completely smashed), and a large metal water tank up above. 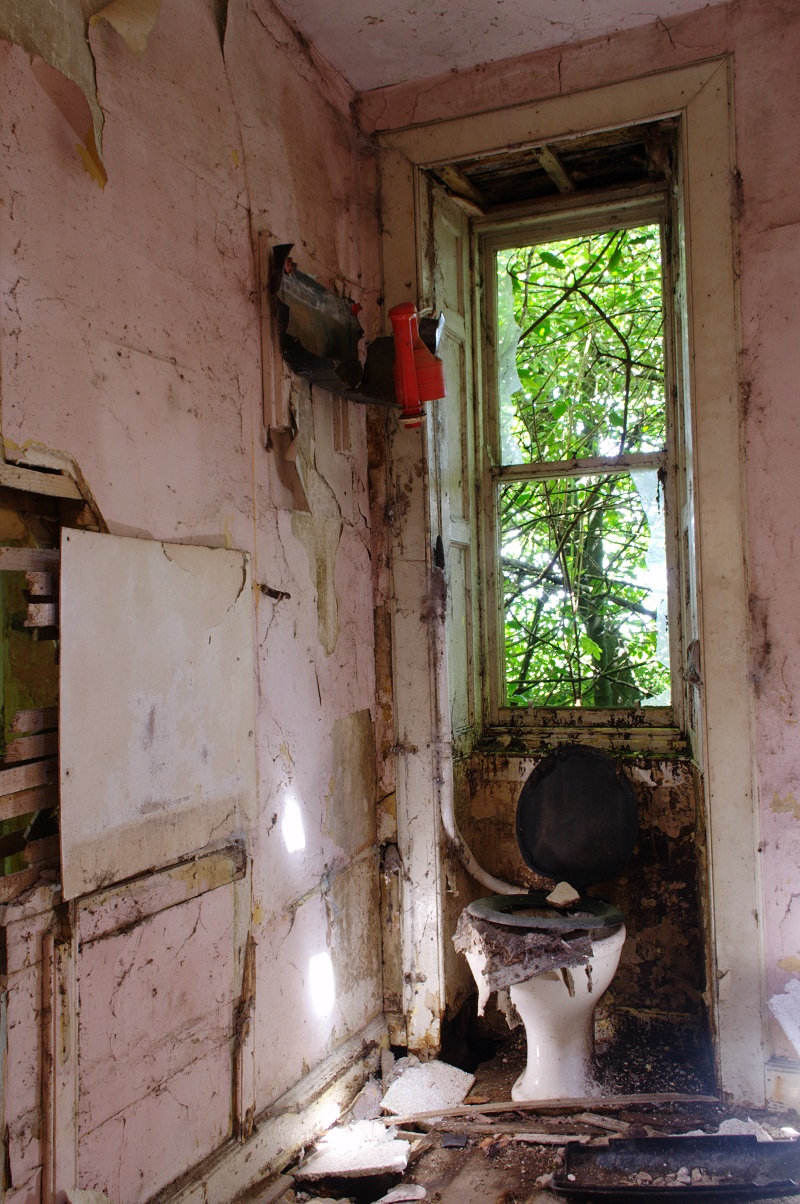 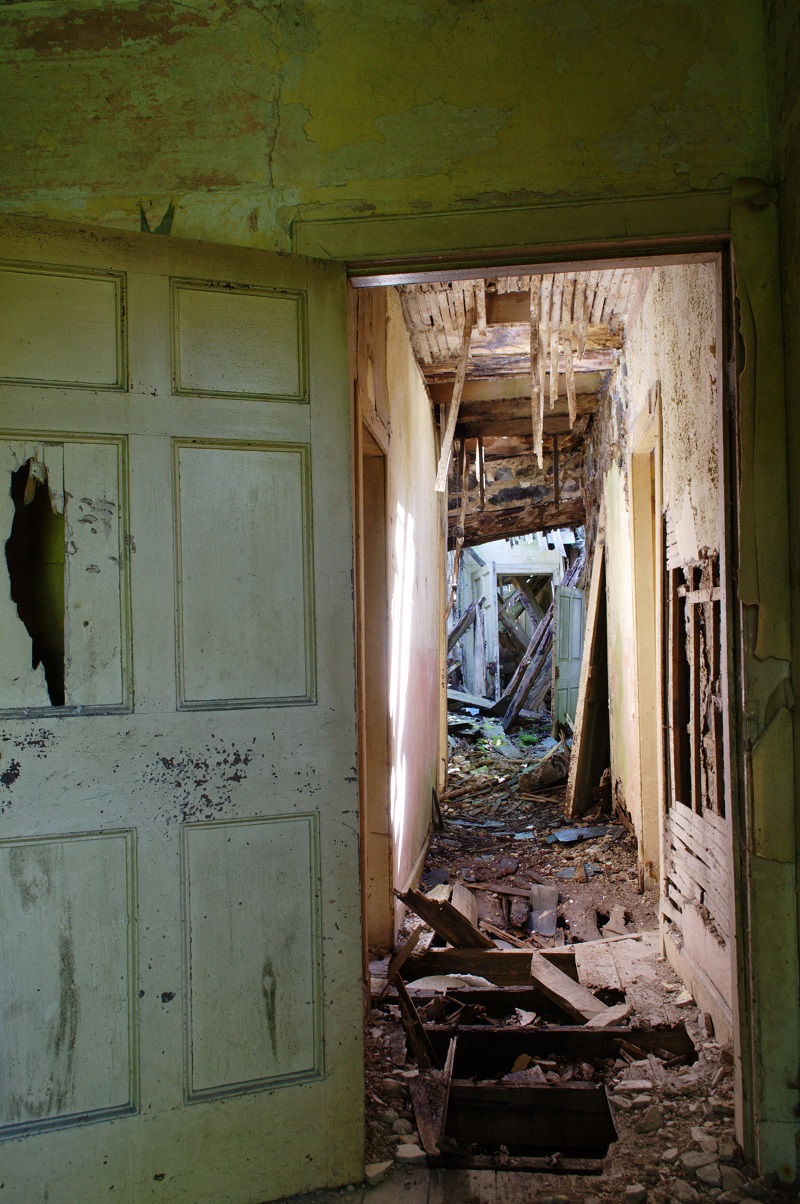 By this time we were starting to think that we’d seen more or less everything the place had to offer and were thinking about heading back to the car, especially as we were getting closer to an occupied house at this point. But my friend was determined to look inside every last building, and that turned out to be the right strategy, because we found something interesting in the very last one… 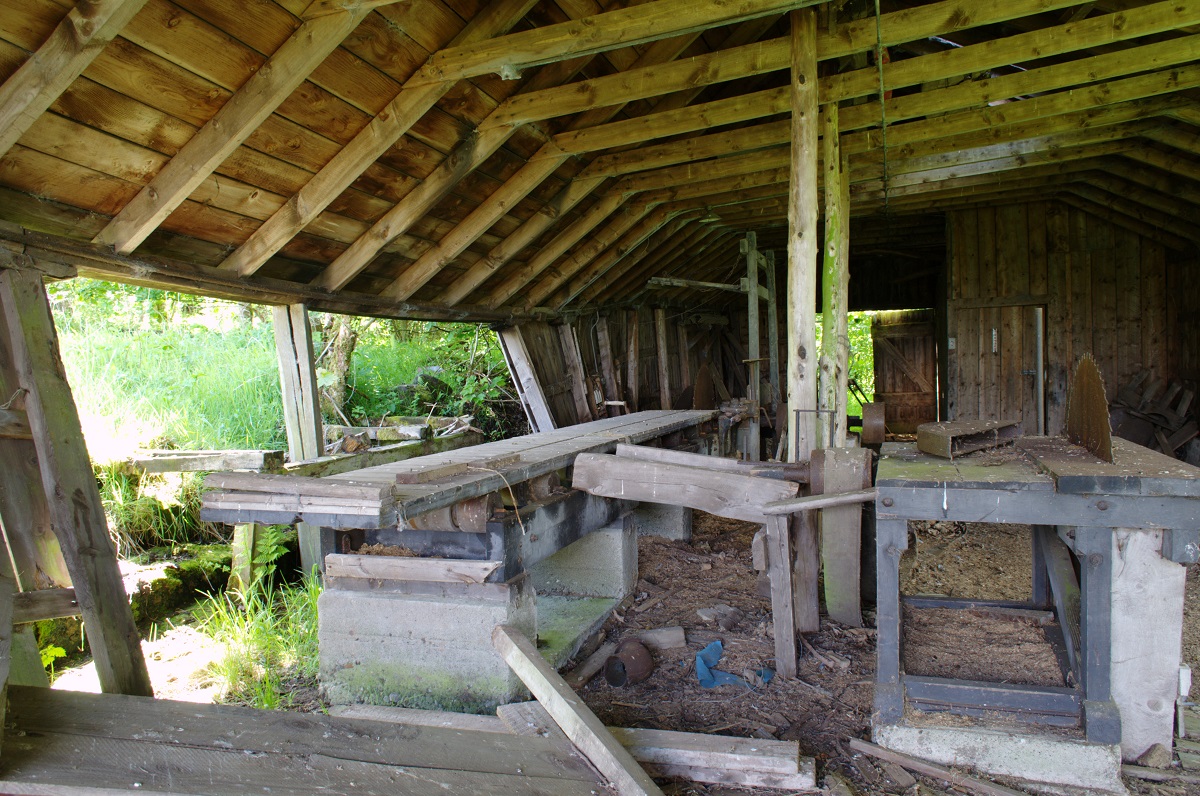 In this unlikely looking tumbledown wooden shed, we found an abandoned sawmill. Two large (but rusted) circular saw blades were still in place, along with their associated table tops, rollers and mechanisms. It turned out to be the unexpected highlight of our day’s exploring.