It’s funny how sometimes you find out about something just in time for it to come in useful to you. Recently, Laura found pictures of a “ghost village” called Pollphail, posted on one of the urban exploration pages, just as we were due to go on holiday to nearby Dunoon. (OK, in fact Pollphail isn’t that near Dunoon… it took nearly an hour’s drive along various windy single track roads to get there, but of course once we heard about it we still had to check it out). 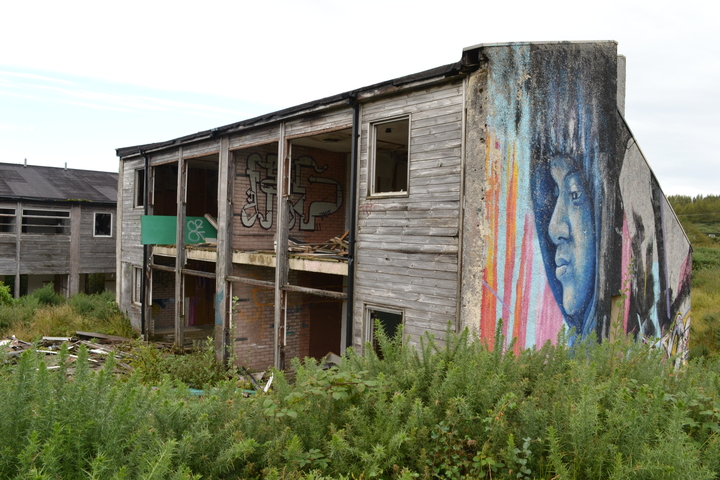 Information about Pollphail is surprisingly sparse online, with just a few news articles about potential redevelopments that don’t seem to have come to anything in the end, and some sets of photos posted by previous urban explorers. Even Google Maps doesn’t admit to knowing where it is. In fact, we weren’t even 100% sure it was still there and hadn’t already been demolished or redeveloped. But as we rounded the last corner, there was no mistaking the mass of decaying concrete buildings. It was still there alright. 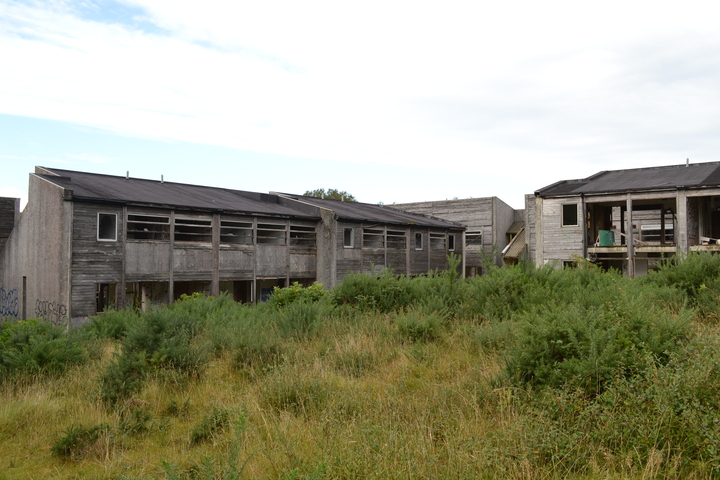 Pollphail was built in the 1970s to house 500 oil rig construction workers, but was never used and has now been lying derelict for over 35 years. There was a dry dock as well as the buildings; this has now been turned into Portavadie Marina. 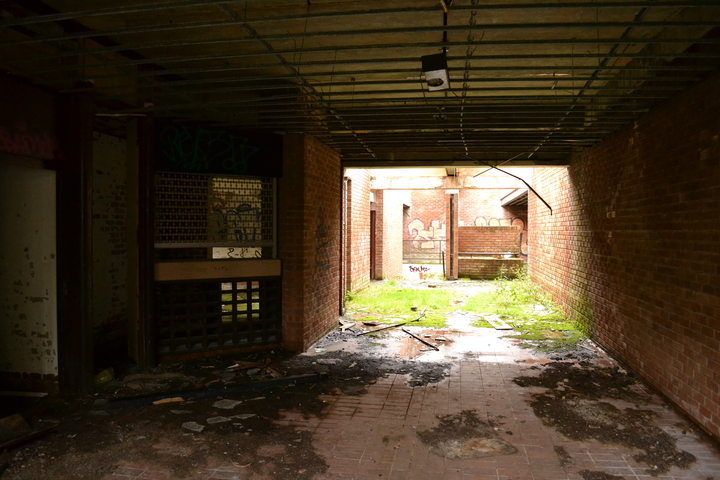 At first it didn’t look big enough to house 500 people, but as we wandered through the rubbish-strewn alleyways, more and more rows of windowless houses were revealed. I’ve never seen anything like it anywhere else. It really did feel like a ghost town. Bangour felt strange, but the constant stream of dog walkers, bored teenagers and security patrols prevented it from ever feeling properly deserted, and the buildings were sealed up tight enough that it was apparent someone still looks after the place. Not Pollphail. We didn’t encounter a single other person on our visit (perhaps not surprising considering the remote setting – it was an hour’s drive for us from our holiday park but it would be over two hours from the nearest city), and the buildings had obviously been left to rot for decades. 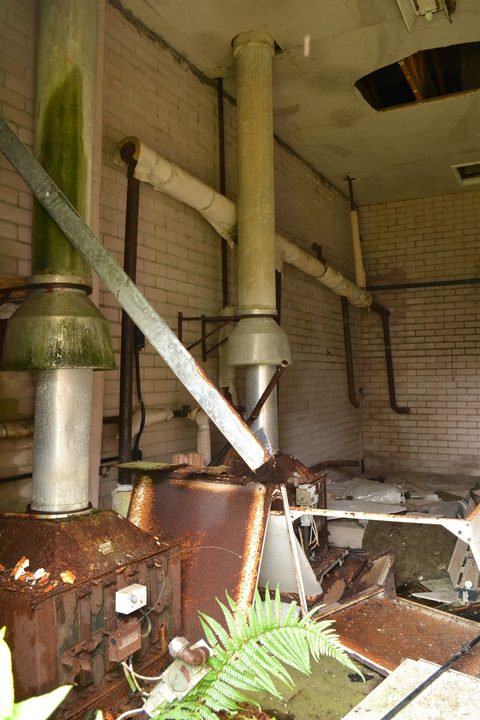 Most of the buildings were rows of the same sort of two-storey houses. I ventured up the concrete steps of one of them but didn’t trust the upper floor to take my weight so didn’t go much further. Near the centre of the village by the public footpath was a cluster of larger buildings that were obviously intended to provide services of some kind. Some of the rooms still contain evidence of what they were built for: washing and drying machines (decorated by an enterprising graffiti artist who seems to have also had a go at several of the outer walls), a wall covered with fuse boxes, some large pipework that was probably part of the heating. Most others have been stripped of anything that could be removed and the fixtures and fittings lie in pieces all around the site. 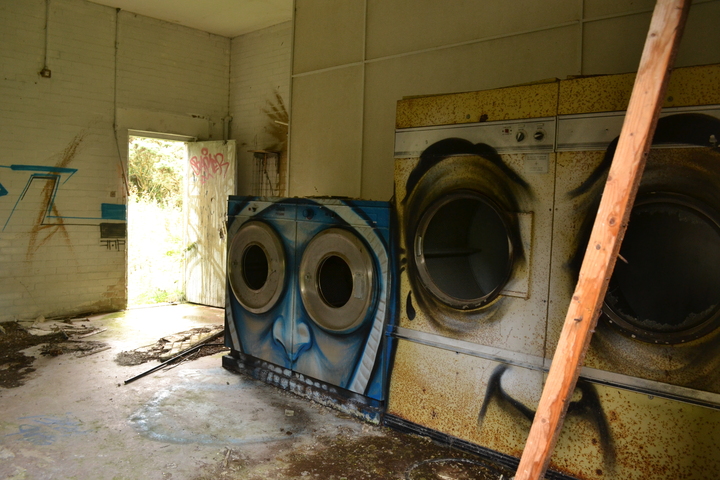 Outside the perimeter fence we saw two large caravans that were also clearly disused, but we couldn’t tell what they were for. Maybe they housed security staff before the site was abandoned completely. 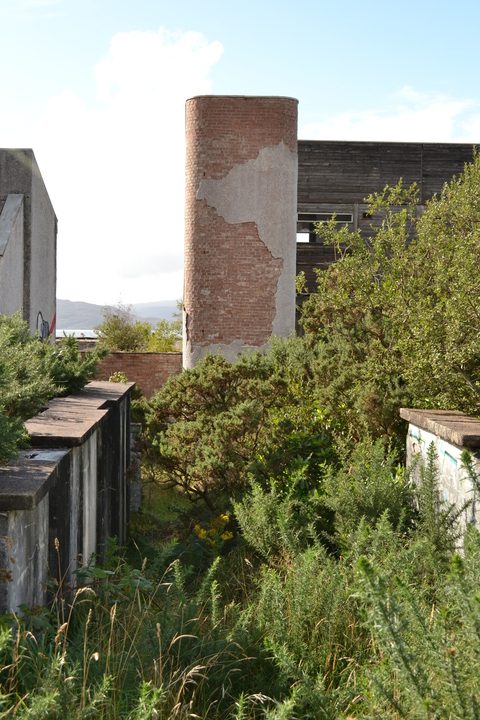 Today, the only residents in Pollphail are the bats. As bats are a protected species and it’s illegal to disturb or damage their homes, it could be legally difficult to do much in the way of redevelopment of the site. (I was careful not to venture into anywhere that there might be bats nesting – please respect them and do the same if you visit!).

Finally, we paid a visit to Portavadie Marina, once the dry dock for Pollphail but now a very smart development with plenty of pretty yachts and upmarket holiday homes. Though if you walk out far enough you can see the forbidding concrete blocks of the village itself rising out of the vegetation just along the shore. It certainly is a strange place. 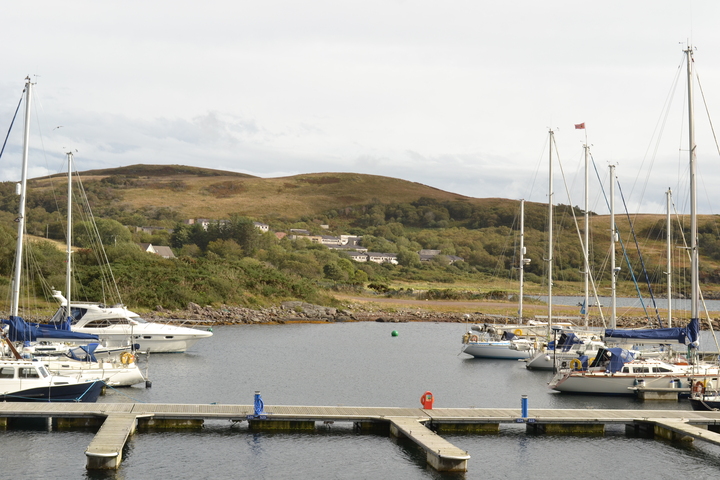