I was determined that I was going to go out and do some proper exploring again, after almost a year of not really doing any*. So I did some planning and research, and the next time I had a morning to myself I set off bright and early with the intention of checking out about six different locations. They were all within the same general area so it made sense to do them all in the same trip.

(* I know I did post on here pretty recently about my air raid shelter explore, but that was actually after the ones I’m writing about here. It was just so amazing that I couldn’t resist putting it up straight away!).

My first site was slightly disappointing – as I got close I could see that it wasn’t deserted as I’d hoped – there was a van parked at the front and workmen within the fencing. Not wanting to waste any time, I pressed on to site number two. This one looked more promising, but it was clear that I wasn’t going to be able to explore it today – there was nowhere anywhere near it that I could park without drawing attention to myself. So I passed it by for the moment, making a mental note to return by bike as soon as I got the chance.

Site number three was my first proper success of the day, and I was very glad about that because it was the one I most wanted to get done. It’s a disused railway station, but possibly not for much longer – the short branch line that it’s on is planned to be reopened in the next few years. I’d known about it for a long time, but it took the announcement of the reopening to spur me on to actually visit it while I still had the chance. 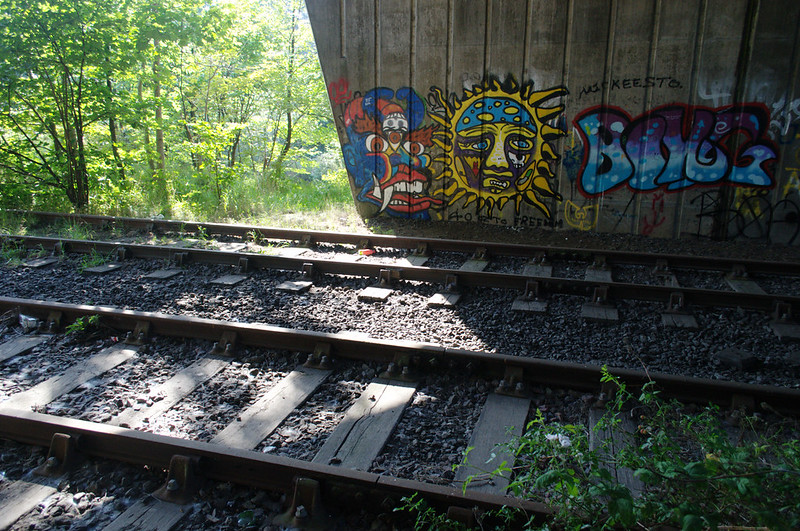 It was a lovely sunny morning as I pushed my way along an overgrown path, hoping I was in the right place. Almost straight away I could see that I was – an old set of rusty buffers were sticking up out of the undergrowth ahead of me, and soon I came to the railway tracks themselves. An impressively large road bridge crossed over the line immediately to my right, as well as over an adjacent river. After taking some photos of the bridge and the colourful graffiti on one of the piers, I set off in the direction of the station, enjoying the novelty of walking along an actual railway track without having to worry about the possibility of getting mown down by a train. 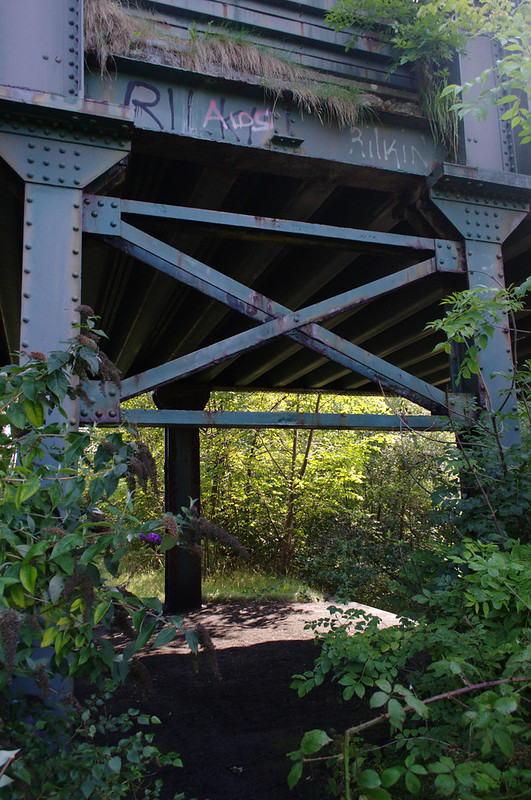 It didn’t take me long to find what I was looking for – presently the land to the side of the track began to slope upwards and form a platform. Another road bridge crossed overhead and as I walked further I could see more tracks and more platforms over to my left. I was in full view of some houses here, though I doubt if any of the local residents really cared that I was there. I did, however, give the far end of the station a wide berth; beyond there I knew that the railway line was still in use, carrying freight to and from a nearby industrial site, and I didn’t want to accidentally trespass on the active part. 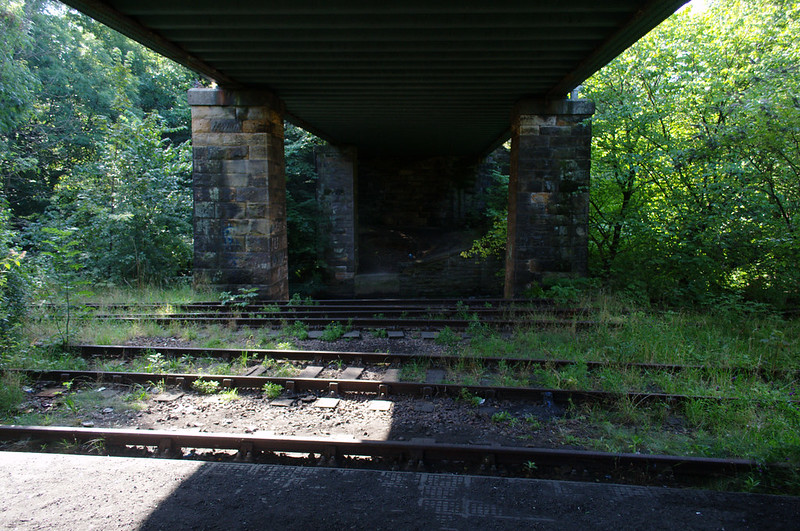 It wasn’t a hugely exciting place (not compared to my favourite abandoned station, at least!) but it was certainly worth a visit and I was very glad to have been able to tick it off before it becomes a construction site and then a live railway once again. Though if work hasn’t started on it by the winter, I’m tempted to go back so I can see it without quite so much overgrown vegetation covering everything.

My fourth port of call was the other site that I had the highest hopes for. It’s a disused meteorological station, apparently used initially by the RAF but later by the Met Office before it was abandoned altogether. My friend who I’d found out about it from said it probably wasn’t worth making the trip to see it, but since I was already about halfway there and since I’d liked the look of it in his video, I decided I was going to anyway. 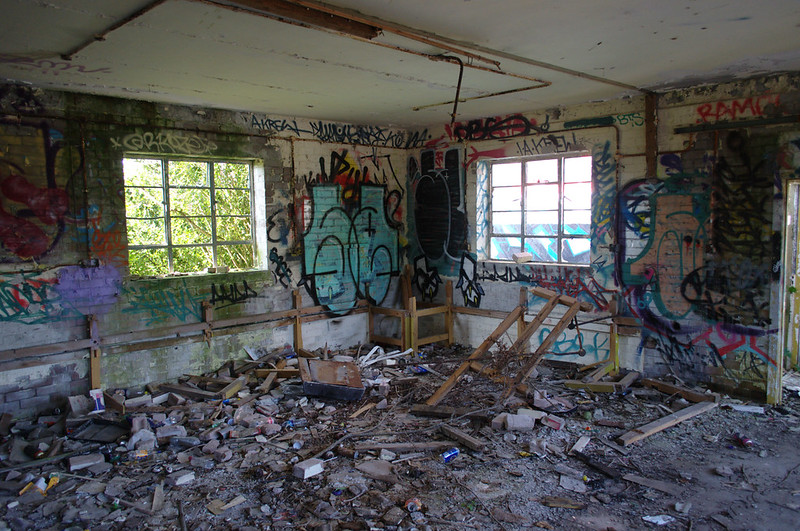 Because this place was out in the country and not particularly close to any other buildings, I hadn’t expected to have any issues getting into it without being seen, so I was a bit put out when I arrived to find that some sort of fun run was going on along the path right next to it, with the result that the whole area was swarming with people! But after coming all this way I was determined to give it a try, so I waited until there was a slight lull in the passers by and then quickly ducked through a gap in the compound fence. 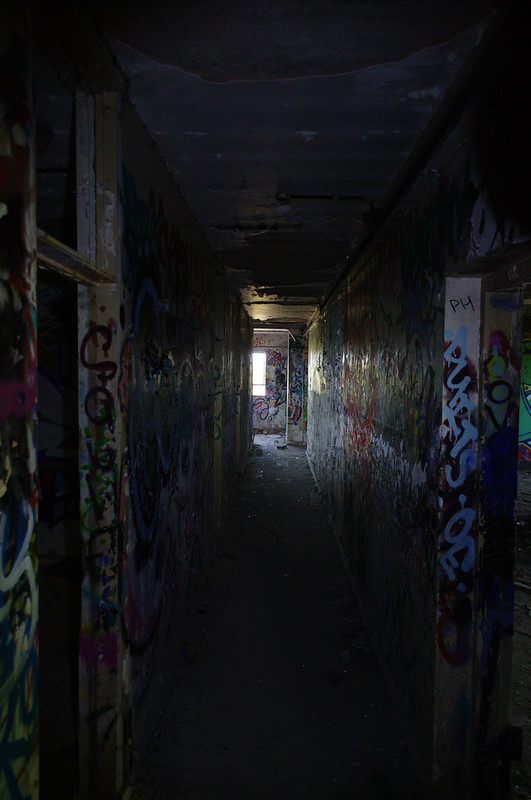 Getting into the building itself wasn’t at all difficult – every single window and door was missing from its frame and open to the air! I entered through some kind of loading bay doors at the end. It was a single storey concrete building, slightly reminiscent of the coastal defence bunkers dotted along the River Forth, but much larger. As I walked through, I lost count of the number of rooms I passed. Unfortunately in most cases it was impossible to tell what they’d originally been for – this must be one of the most trashed places I’ve ever been, with every wall coated in layer upon layer of graffiti and every fixture and fitting torn down and smashed on the floor. I think the only reason the walls themselves are still standing is because they’re reinforced concrete and so not as vulnerable to vandalism and decay as other construction types. 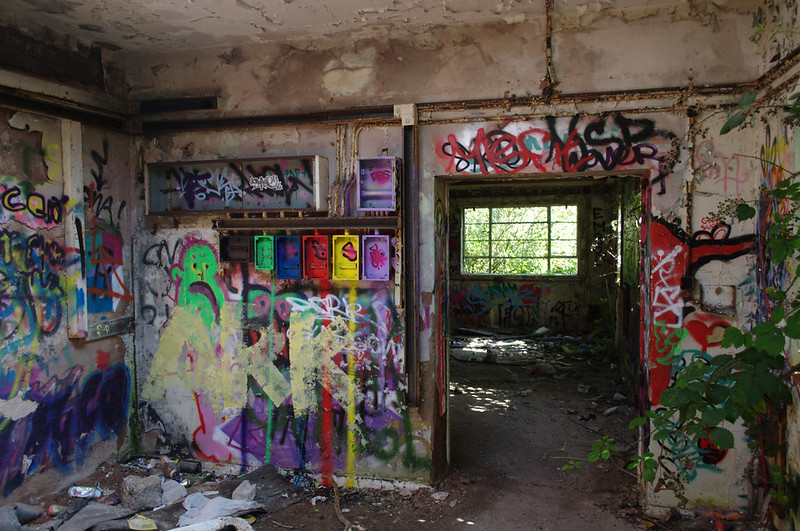 Nevertheless, I did enjoy my wander round and I got some good photos and video footage. I kept hearing noises and thinking I wasn’t alone in the building, but it turned out just to be the resident pigeons, and people passing by on the nearby coastal path.

By the time I left the meteorological station it was getting later and I didn’t have enough time for a proper look at sites five and six, though I did drive past them for a quick look. Two out of six might not seem like a particularly good success rate, but it’s actually fairly typical for urbex, since you never know until you get there whether a place is going to be accessible or not. I was very happy that I’d finally done some exploring again and that my top two target sites had both been a success.

After so long of hardly exploring, I’ve now (amazingly) actually got a backlog of explores to write up, having managed to do one a week for the past five weeks! I don’t expect to be able to keep that up for long, but do come back and check again soon if you enjoy my posts.