The abandoned portion of the Glasgow Central Railway through the west end was probably my favourite explore so far. But although the section of that line through the city centre is no longer abandoned since its reopening in 1979, there is also a disused hidden gem right underneath Glasgow Central Station: a never-reopened low level platform. 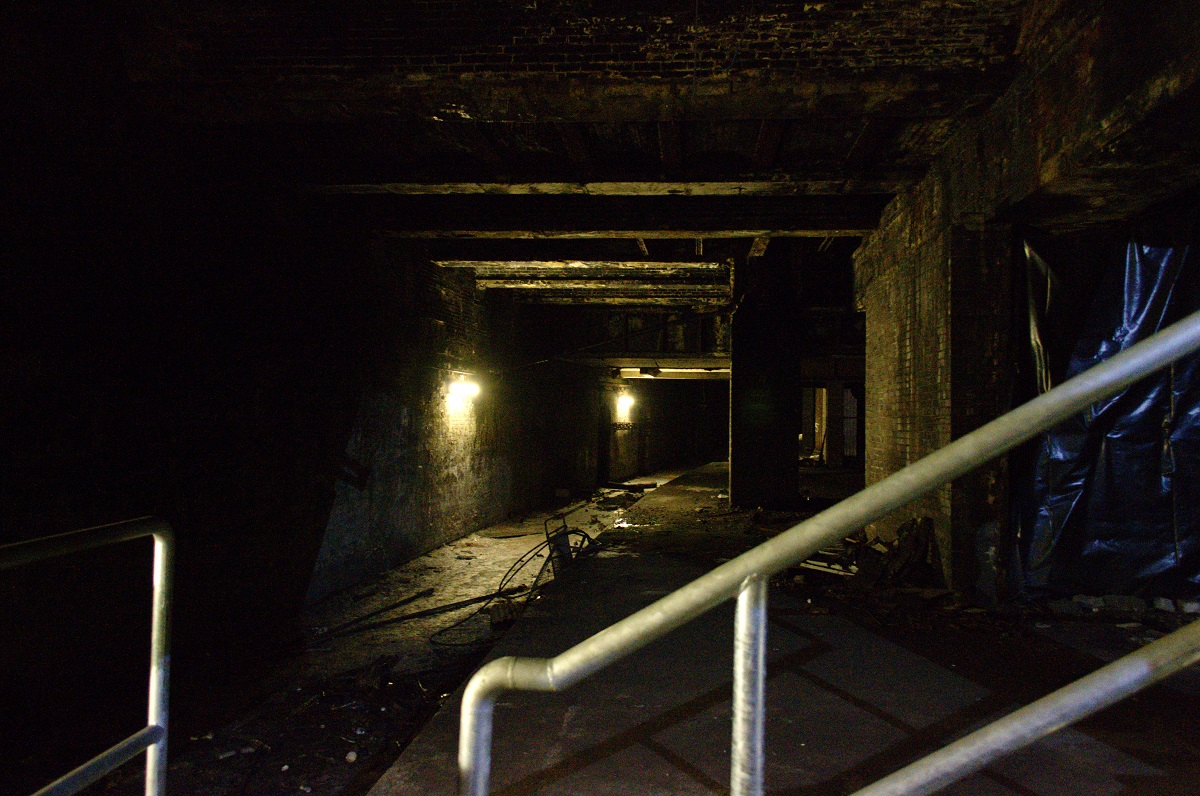 The low level station, opened in 1896 after the Glasgow Central Railway had been painstakingly pushed through the city just a few feet below Argyle Street, originally had four tracks with two island platforms to serve them. It wasn’t completely covered over either; there was a large opening in the roof (within the block bounded by Argyle Street, Holm Street, Hope Street and Wellington Street), which would have been very necessary for ventilation in the days when steam trains worked the lengthy tunnels. But when the line reopened as the Argyle Line after 15 years of disuse, a number of changes were made from the original design. Most notably, only one island platform was brought back into use to serve the double tracks, the other being walled off and largely forgotten about. The ventilation opening, no longer needed as the new line was to be worked only by electric trains, was also closed up.

(Incidentally, elsewhere in Glasgow, Queen Street Low Level Station also had four tracks originally, served by one island platform and two side ones. It was also reduced to two tracks during modernisation work, but in this case the island platform was simply removed and the side platforms widened to take advantage of the extra space, which explains why both the platforms themselves and the space between the tracks seem unusually wide today. Unlike at Central, nothing was walled off and hidden).

Despite the tour poster describing it as a “Once in a lifetime experience”, this was actually the second time I’ve been on it; the first time was back in November 2014 soon after it started running, but things have changed quite a bit since then in ways I’ll describe later on, so it was well worth doing it again. The photos are a mixture from both my times on the tour. I’m sorry about the graininess and blurriness of some of them. Some of the areas underneath the station are very dark and it’s not easy to get good pictures in those conditions with a crop sensor SLR and no tripod! 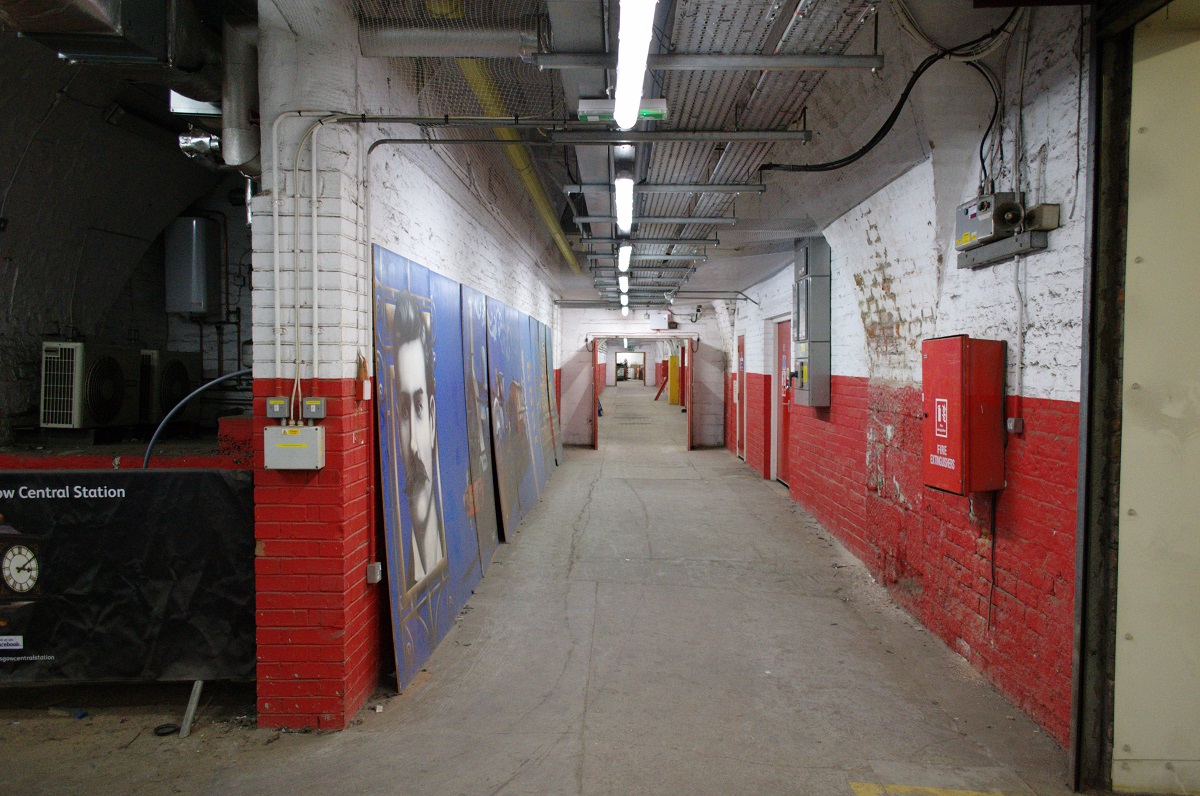 Glasgow Central Station is huge, one of the biggest railway stations in the UK and apparently the largest building in Glasgow. The main concourse that most people will be familiar with is, as our tour guide (the station’s very knowledgeable and entertaining historian, Paul Lyons) said, just the tip of the iceberg: there are several hidden levels underneath that the public mostly don’t get to see, and this was where most of the tour took place. 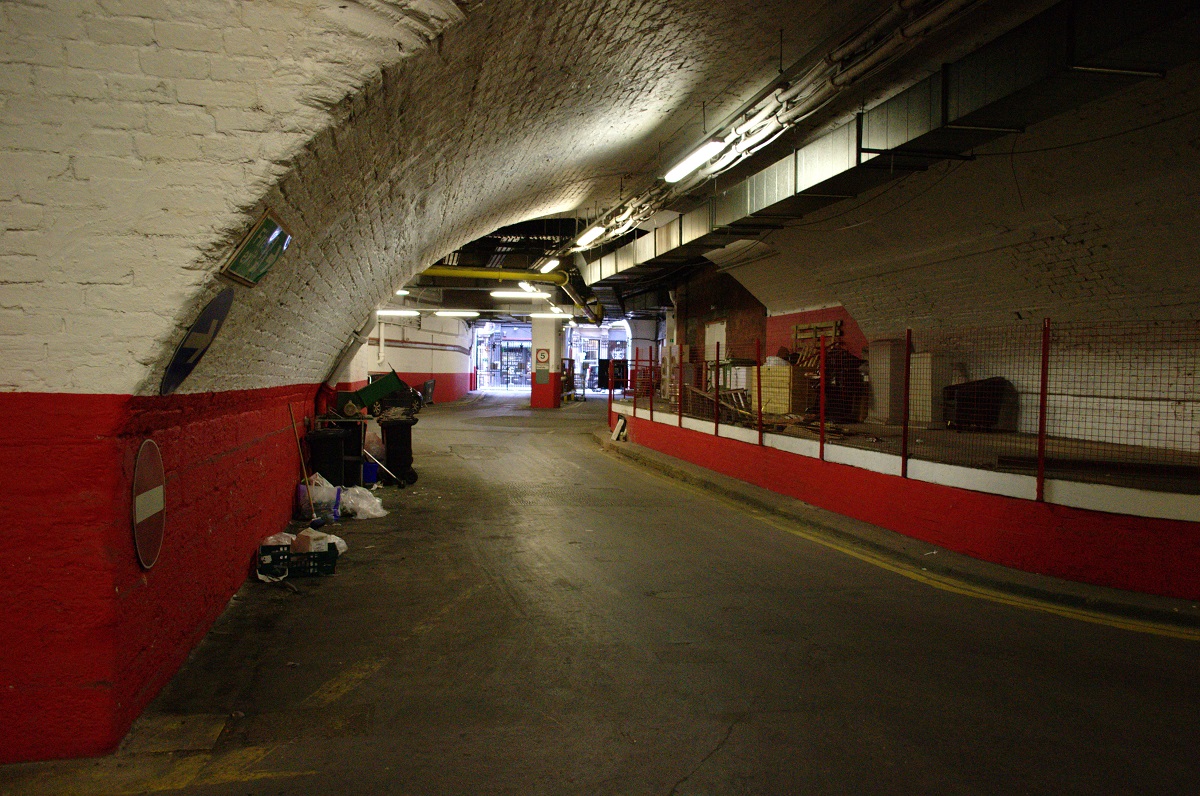 Directly beneath the concourse is a basement level consisting mostly of vaulted arches, though with lots of modern partition walls and so on added. This would originally have contained grain and coal stores, as well as areas used for transporting parcels. It’s now mostly used as parking for vehicles on railway business. It’s on the same level as most of the surrounding streets and there are vehicle gateways leading out to Hope Street on the west side. (This is also the same level as the small lower concourse and the public toilets). 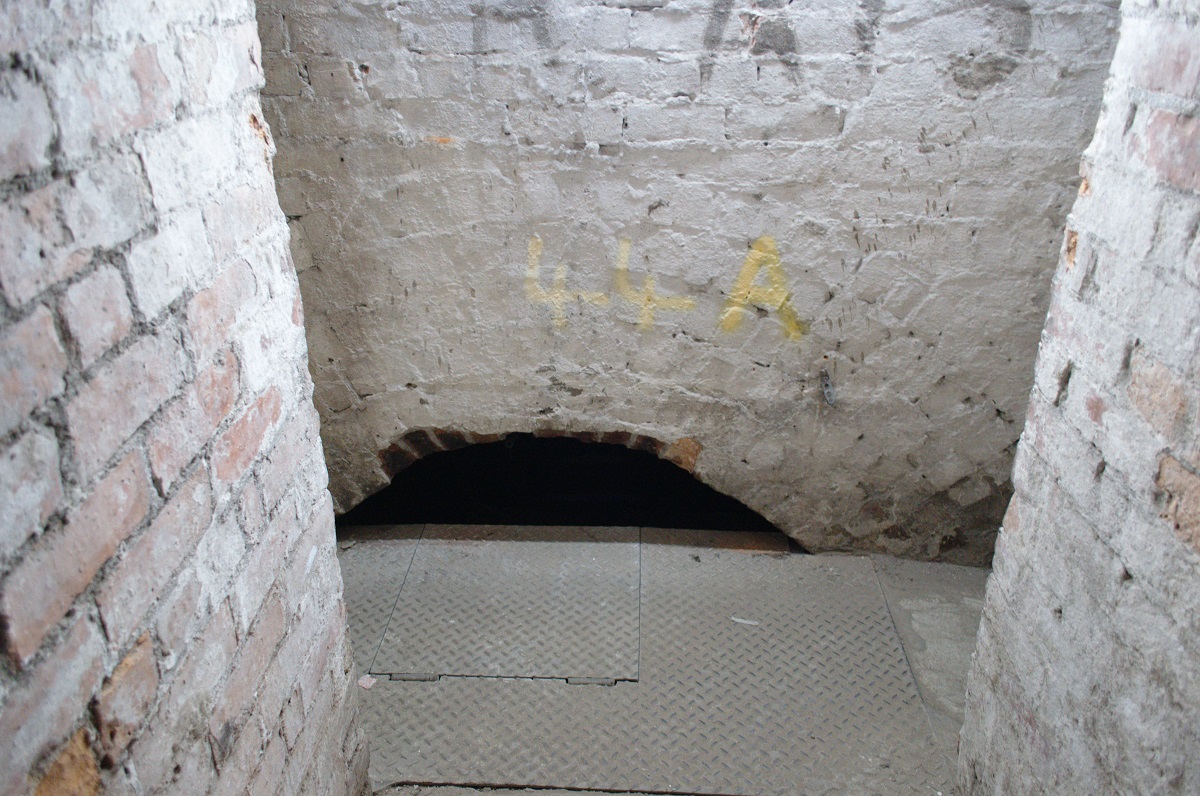 At the back of the basement is an interesting remnant dating back to before the station was built: this very old tunnel, which originally led from the Broomielaw on the Clyde up to the village of Grahamston. It would have been used for transporting goods to and from boats on the river. There are all sorts of urban legends about Grahamston, mostly along the lines of buildings from it being perfectly preserved and still existing in a hidden space underneath the station, but the more boring truth is that the vast majority of it was demolished when Glasgow Central was built and only a few small relics remain today. This tunnel is one of them, and apparently some old cobbles from one of the village streets have also been uncovered recently.

The tunnel is now walled up in the middle to prevent rats from coming up from the river into the station basement. 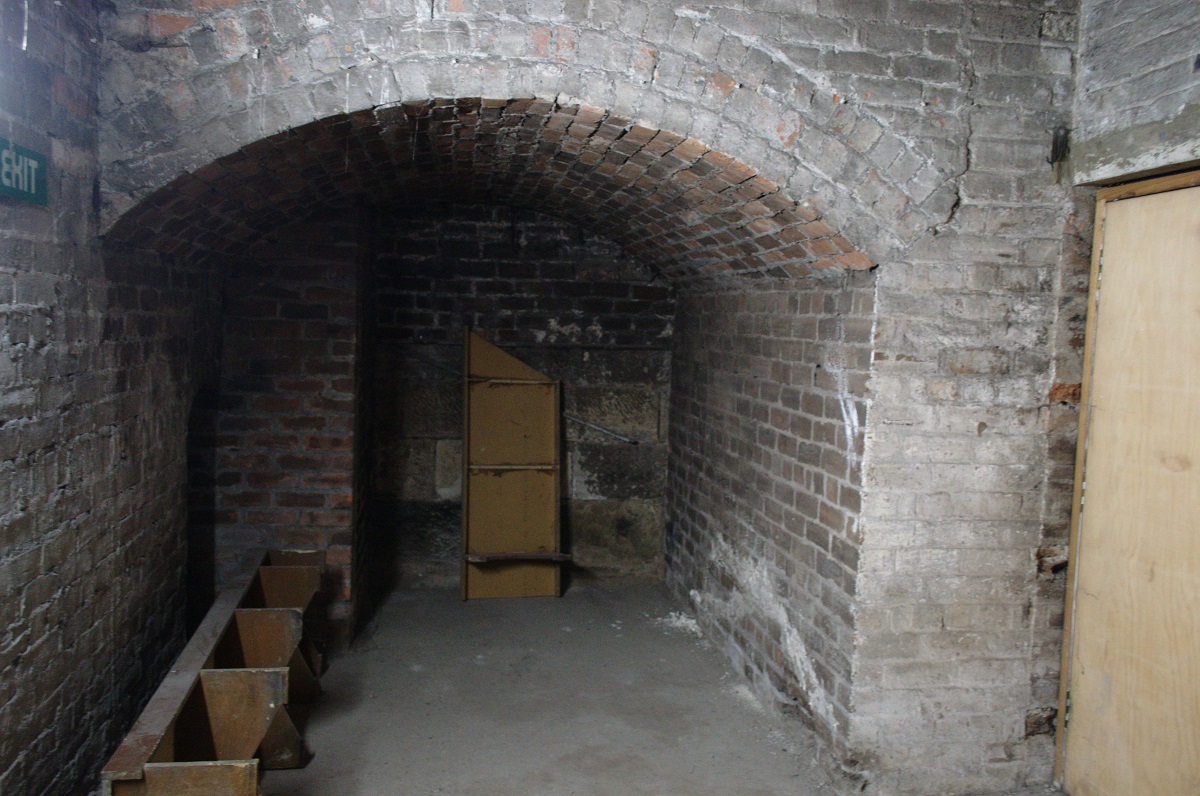 Near the end of the tunnel is a little brick room that’s supposedly haunted by the ghost of a lady. Paul Lyons had some amusing stories about this room, but I won’t spoil them here. If you want to hear them you should go on the tour as he tells them much better than I could. 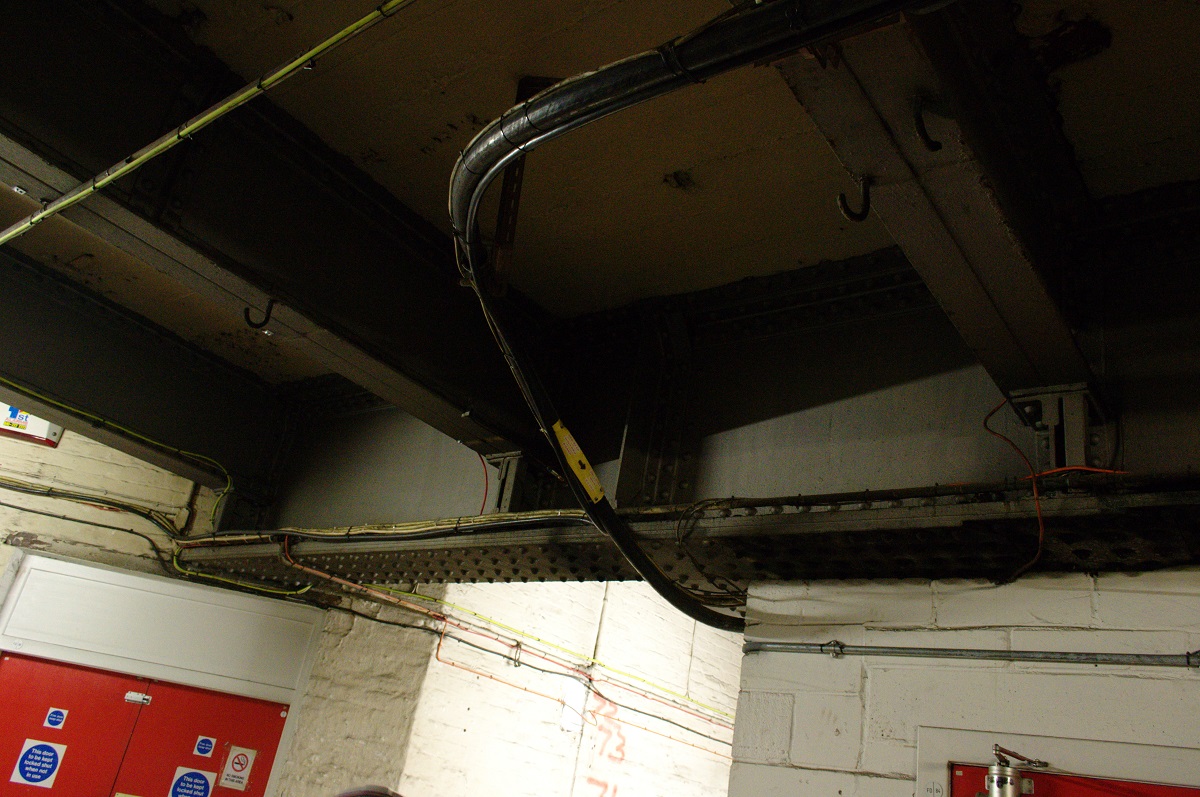 There is a sub-basement level underneath the vaulted basement and below street level, though we didn’t see quite so much of this. The stories associated with this part were quite emotional due to it having been used as a makeshift mortuary during the First World War. There were also some very large and solid looking exposed iron girders to admire, dating from the station’s original construction over 100 years ago and apparently faring much better than some of the newly added walls! 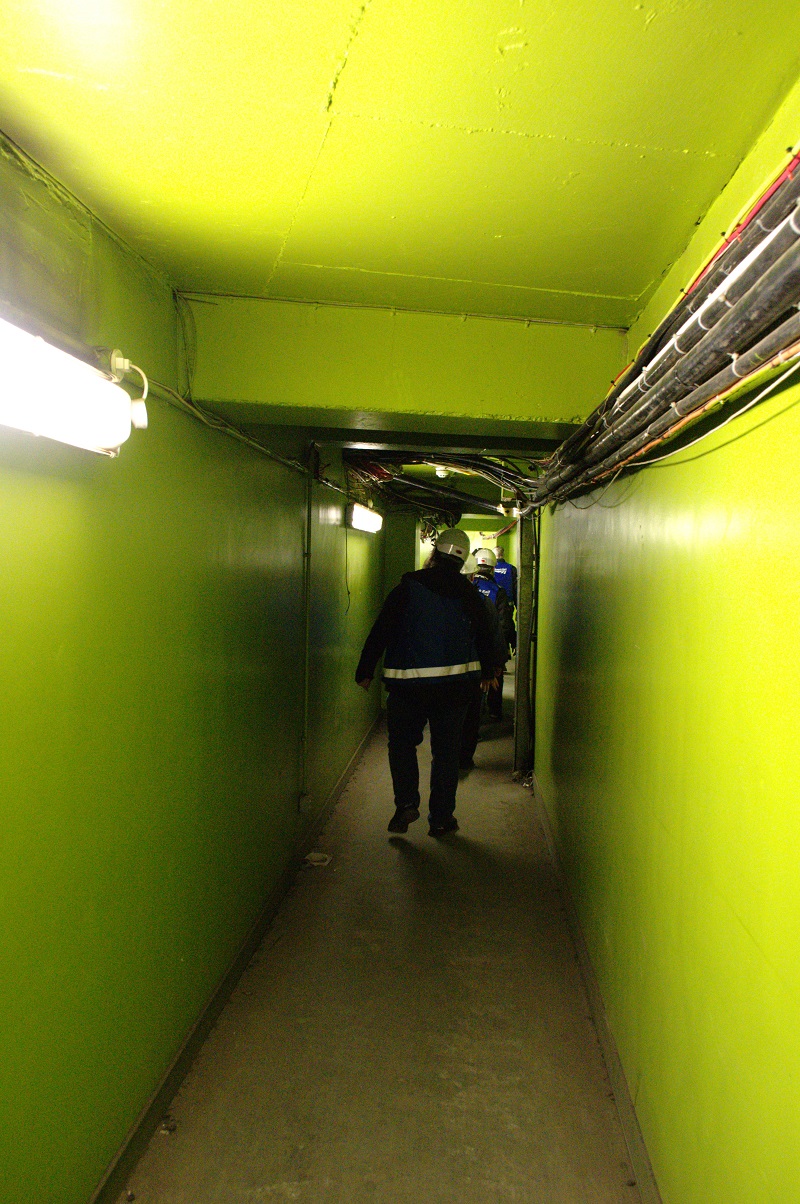 From here, a very green corridor led us to the low level station, and the part of the tour I was most looking forward to!

Through a non-descript looking door in the corridor leading to the present platforms 16 and 17, a new metal staircase has been constructed to take visitors down onto the disused island platform. This staircase was the main reason I wanted to do the tour a second time; it hadn’t been built yet the first time I came and we had to content ourselves with looking down on the platform from above and trying to take photos from a rather awkward angle. So when I heard it was now possible to actually go down there and explore the platform area, I had to go back (though I did enjoy seeing everything else a second time as well). 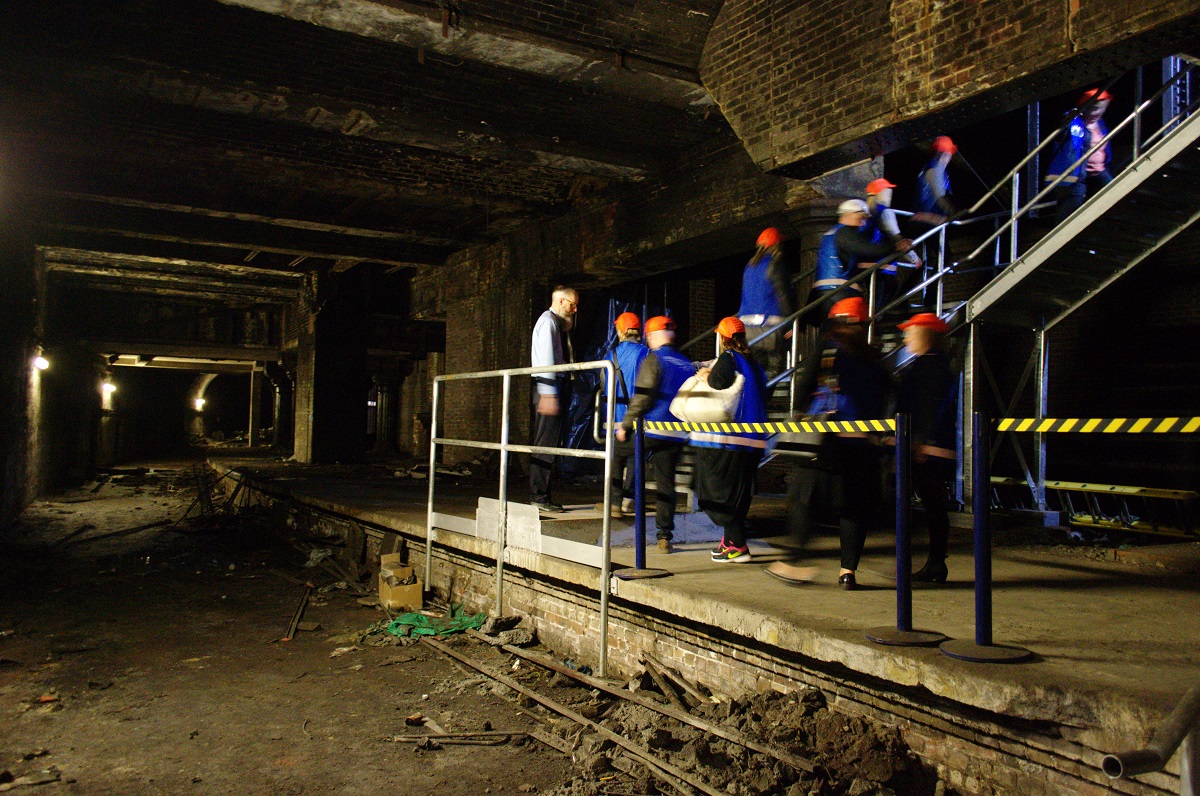 The abandoned platform sits just to the north of the ones that are still in use, behind the wall facing platform 16. At its western end it’s blocked by another wall, probably because new buildings have been constructed in the area that was once the ventilation opening (you can see into a basement corridor of the building through a little hole in the end wall). The eastern end of the platform disappears into the distance in tunnel, with a mixture of metal girders and brick arches overhead. Apparently it still joins up with the live line tunnels eventually, but we didn’t go that way. 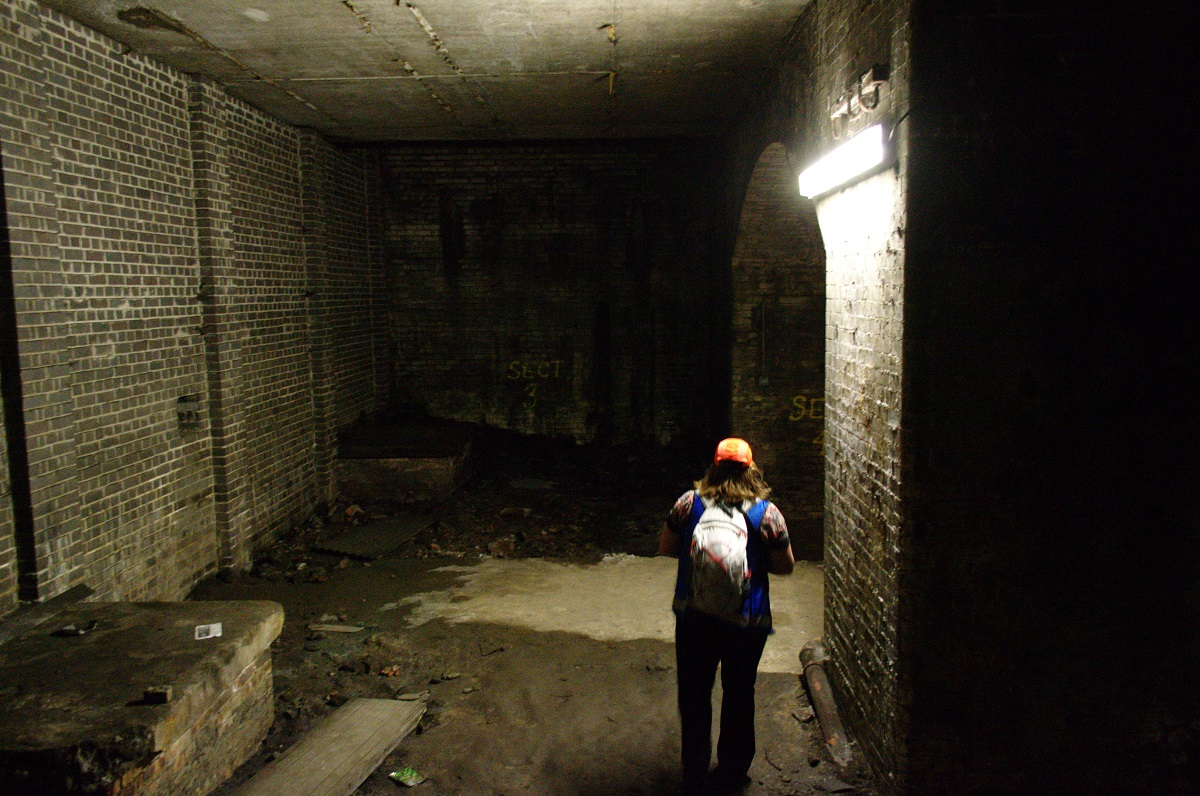 Although there are fluorescent lighting tubes along the wall, the area is still very dark and atmospheric. As well as seeing the platform itself, we also got to go across the old trackbed and round a corner into a lower tunnel on the far side. This one doesn’t go very far now, but it was fascinating to see it all. I missed some of the description of this tunnel as I was still taking photos round the corner, but apparently it was a ladies’ waiting room at one point. 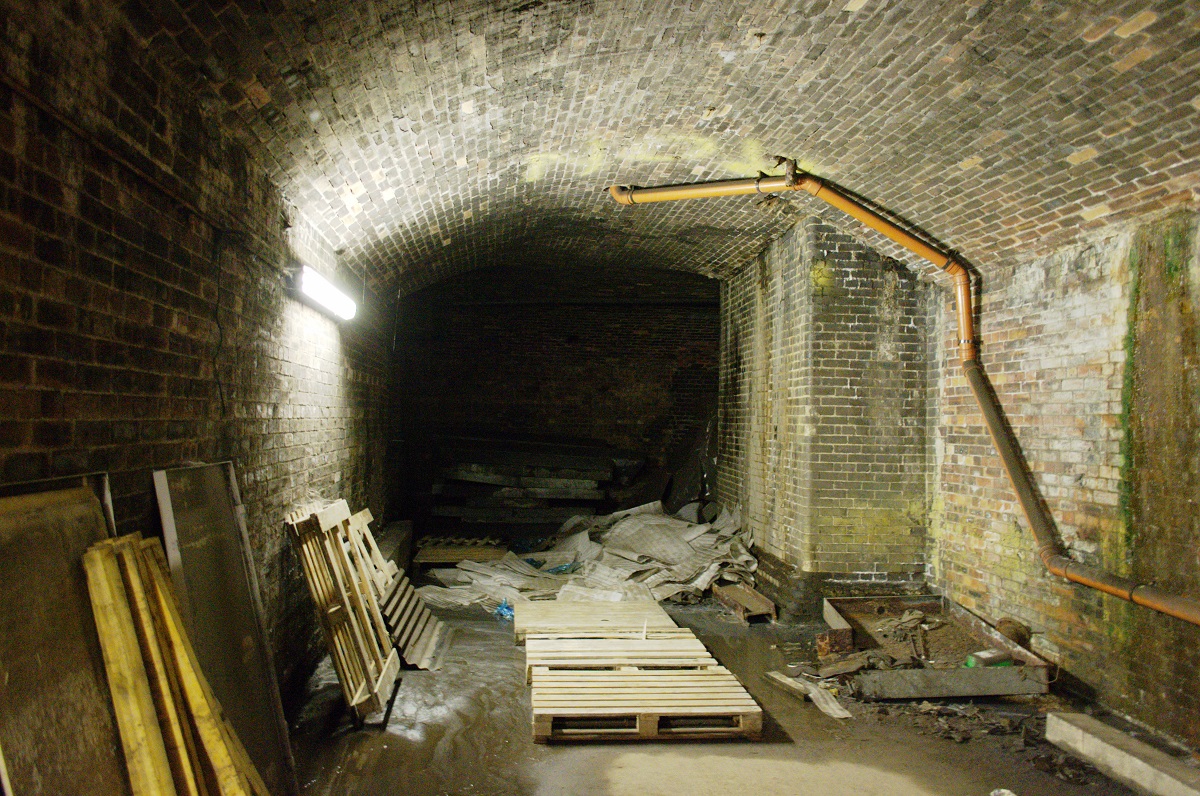 There are plans for more improvements to the disused low level area for future tours – again I won’t spoil what they are. The ticket money from the tours is all being put into projects like that, so I expect I’ll be back again in the future.

I’d highly recommend this tour to anyone who’s interested in railway history or engineering, or just wants to see another side to a well known part of Glasgow. I wish more places would run tours like this – I’m sure they’d get plenty of takers for Scotland Street Tunnel or Botanic Gardens Station tours, though the powers-that-be would probably claim that was far too dangerous to be allowed…