After helping Laura set up for one of her craft fairs, I found myself at a loose end in the Peebles area for a few hours. Naturally, the first idea that came to mind was to go explore all the disused railway tunnels in the area. So I did. I like tunnels, you see.

There are quite a few abandoned railway lines in the Borders region, but surprisingly few tunnels considering how hilly it is around there. The lines mostly followed river valleys and avoided the hills, but there are some tunnels where the river meanders round in a loop and the railway took a shorter course straight through the higher ground.

My first port of call was a small one, the Eshiels tunnel, just east of Peebles on the old Peebles Railway to Galashiels (later the North British Edinburgh, Peebles and Galashiels section): 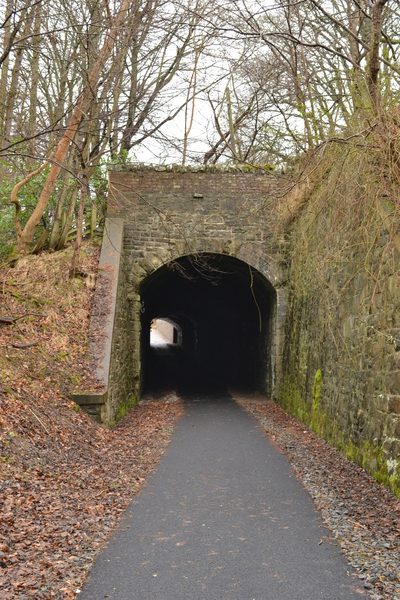 It’s now an underpass under the A72. The western end was filled in after the railway closed and for years the tunnel was impassable. It was reopened as part of a cycle path project in 2010. The west portal is still partially filled in so the arch seems very low here, but the floor slopes downwards and the eastern end is full height.

I then went to investigate three tunnels near Galashiels. These are due to be reopened soon as part of the Borders Railway project, so I was keen to have a look at them on foot while that’s still possible.

The southernmost one is the Ladhope Tunnel, another short underpass and part of a well-used walkway on the old railway route in Galashiels itself: 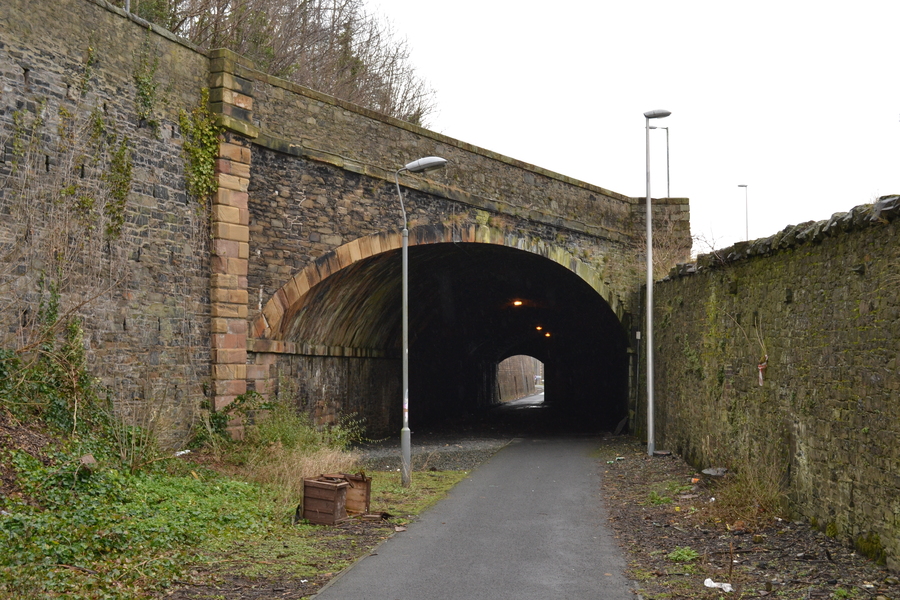 It looks as if part of the tunnel has been walled off at some point, I’m not sure why. The southern portal is partially blocked, though the northern one (on quite a skew) is fully open.

Torwoodlee Tunnel is also fairly short, but in a much more rural setting. It’s on a cut off section of the trackbed as the bridges that used to span the Gala Water at either end of it have been removed and only the pillars remain: 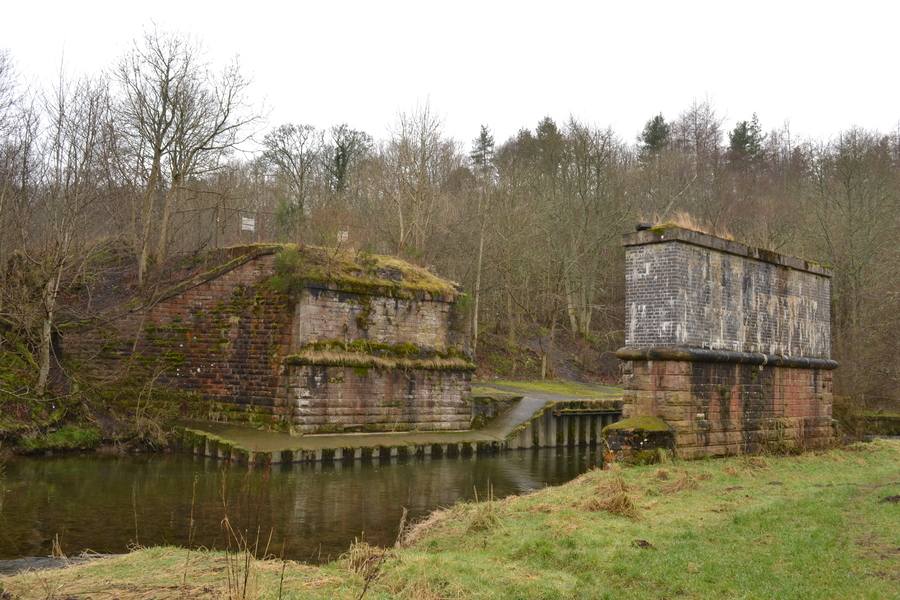 The tunnel appears to have been fenced off at some point but it’s now standing open. Some work has apparently been done in there already; the walls are covered in blobs of some sort of foam sealant, maybe to stop water permeating through the roof (though there was plenty still finding its way through when I visited). 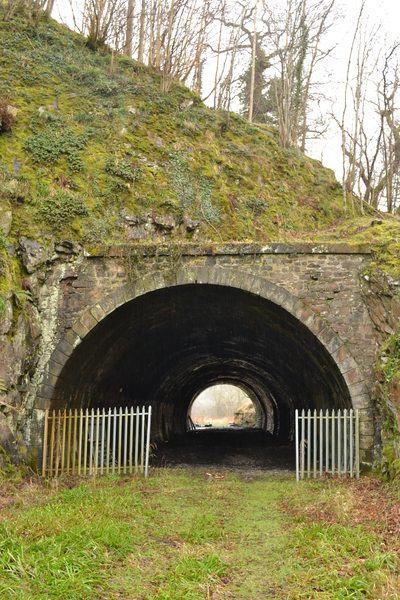 The highlight of my tunnel day was the Bowshank Tunnel. Unlike the others, this one is actually a decent length (250 yards) and clearly a proper tunnel rather than some glorified skew-bridge. Both portals are quite easily visible from the main A7 road if you know where to look. There are also bridges across the river at either end – unlike Torwoodlee’s, these ones are still in place!

I approached the tunnel from the north side, along an open embankment, then across the low metal bridge: 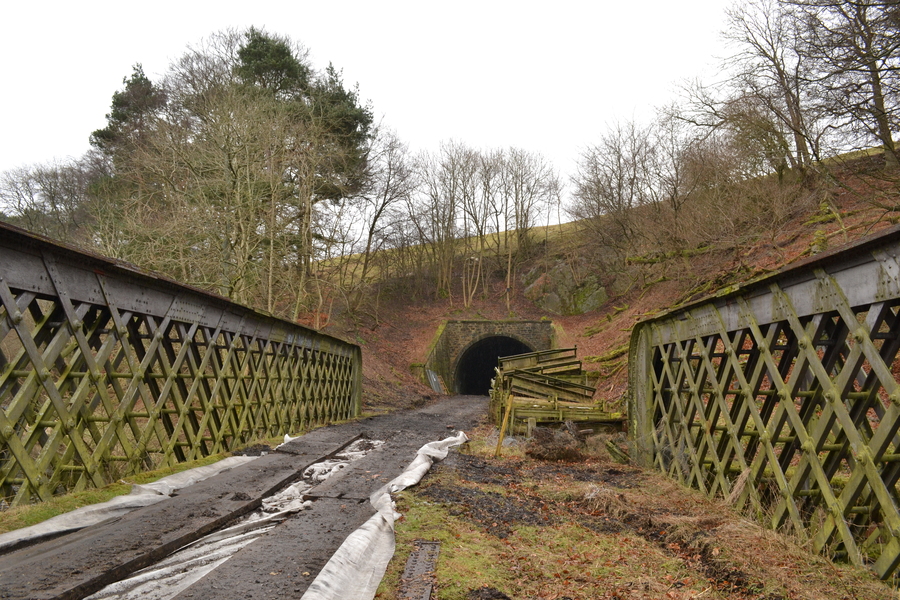 The floor in this one was quite uneven, with trenches full of water running along the length of it. As at Torwoodlee, work appeared to have been done on the walls recently. I also noticed electric lights had been installed along the roof, but they weren’t switched on. 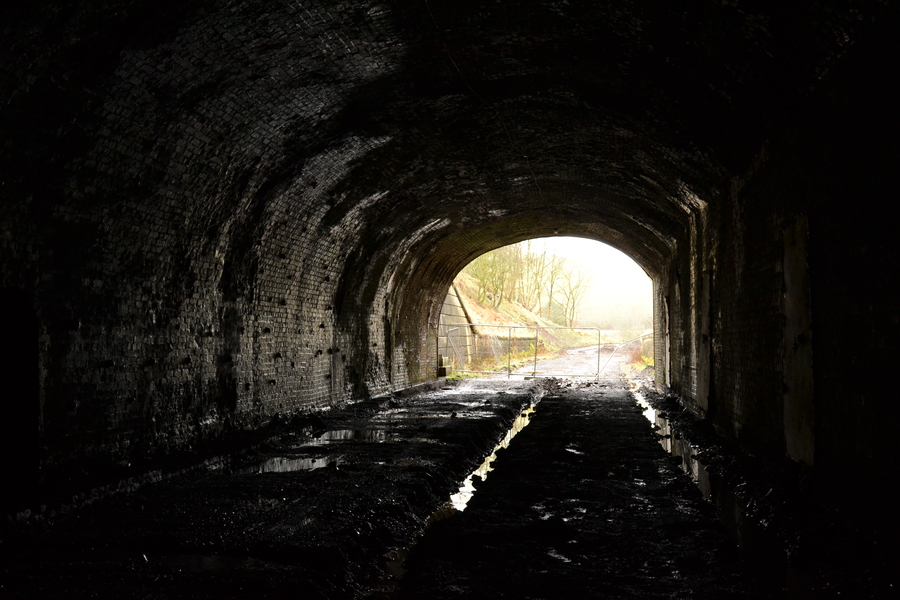 There’s a bend, but you can always see one end or the other so it doesn’t get too dark.

Finally, I may as well mention the Neidpath Tunnel which I went to a few weeks ago. This is on the line west from Peebles (originally the Symington, Biggar and Broughton Railway), and at over 600 yards, it’s much longer than the others. 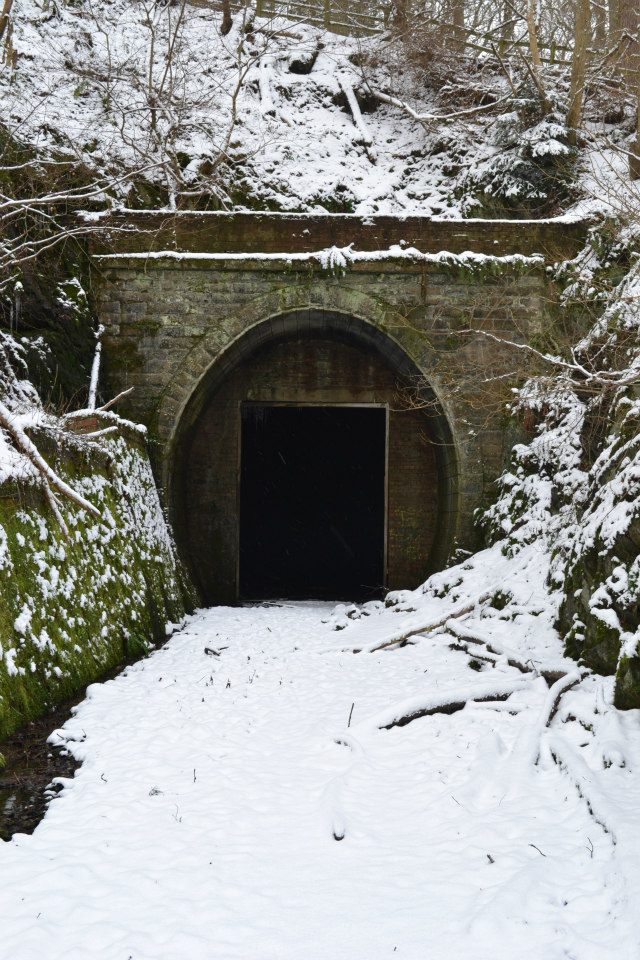 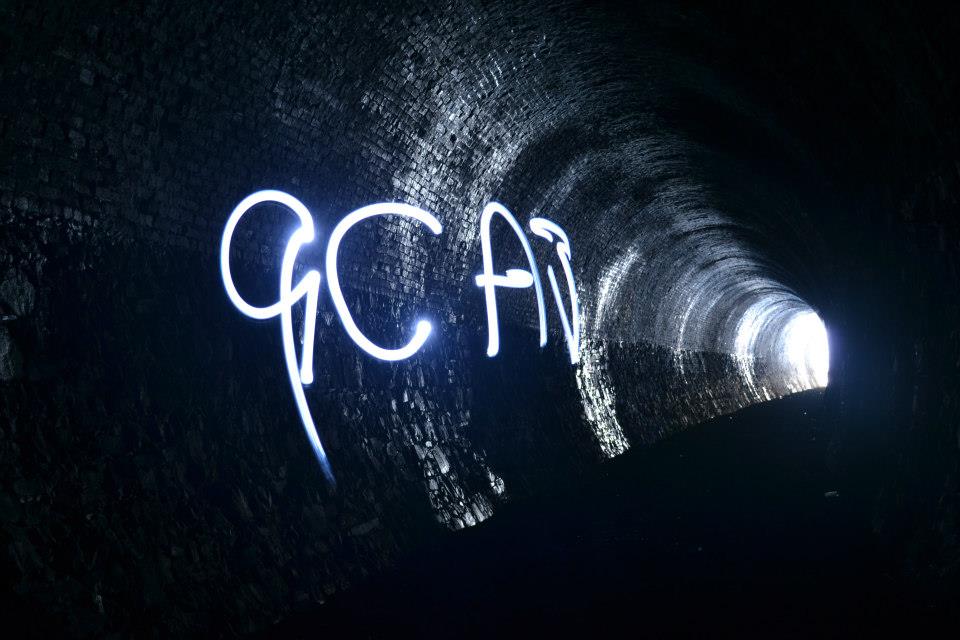 It’s also a much smaller bore than the Galashiels ones as this was a single track line. There is quite a curve to it and no lighting, so a torch is definitely needed for this one! There are empty doorways at either end so presumably it was closed off at some point, but at present you can walk right through to the picturesque viaduct at the far end: 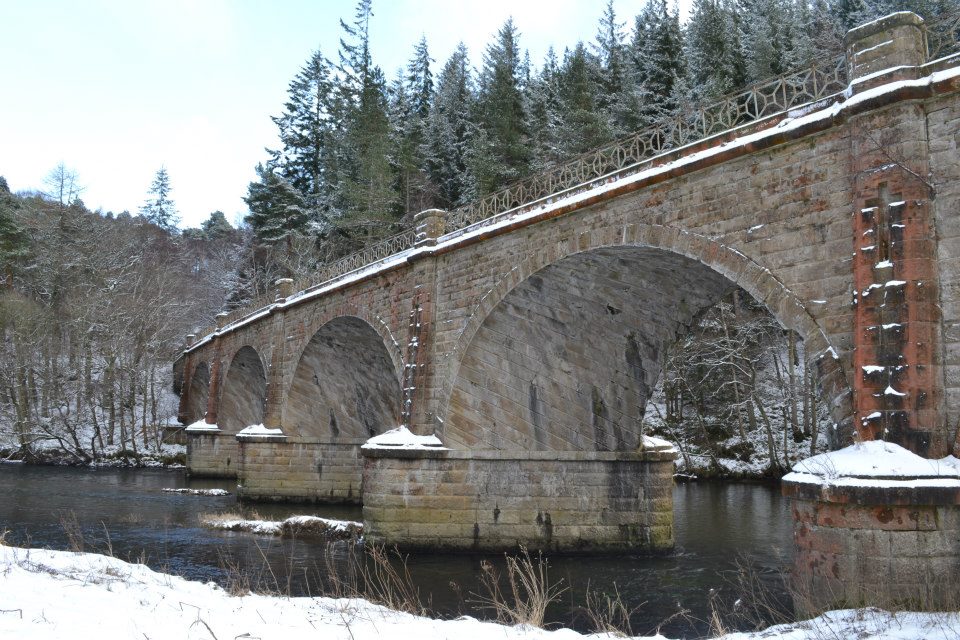 So… that’s most of the Borders tunnels. As I said, there aren’t that many. The only others I know of are Penmanshiel and Whitrope. Penmanshiel was originally on the East Coast Mainline between Berwick and Dunbar, but in 1979 it collapsed during repair work, killing two workmen. The damage was deemed too serious to reopen the tunnel or even to recover the bodies, so the railway was rerouted through a cutting and the tunnel covered over instead. Today the only visible remains are a memorial to the dead workers (right above the point of the collapse) and a bridge across the old route of the line. 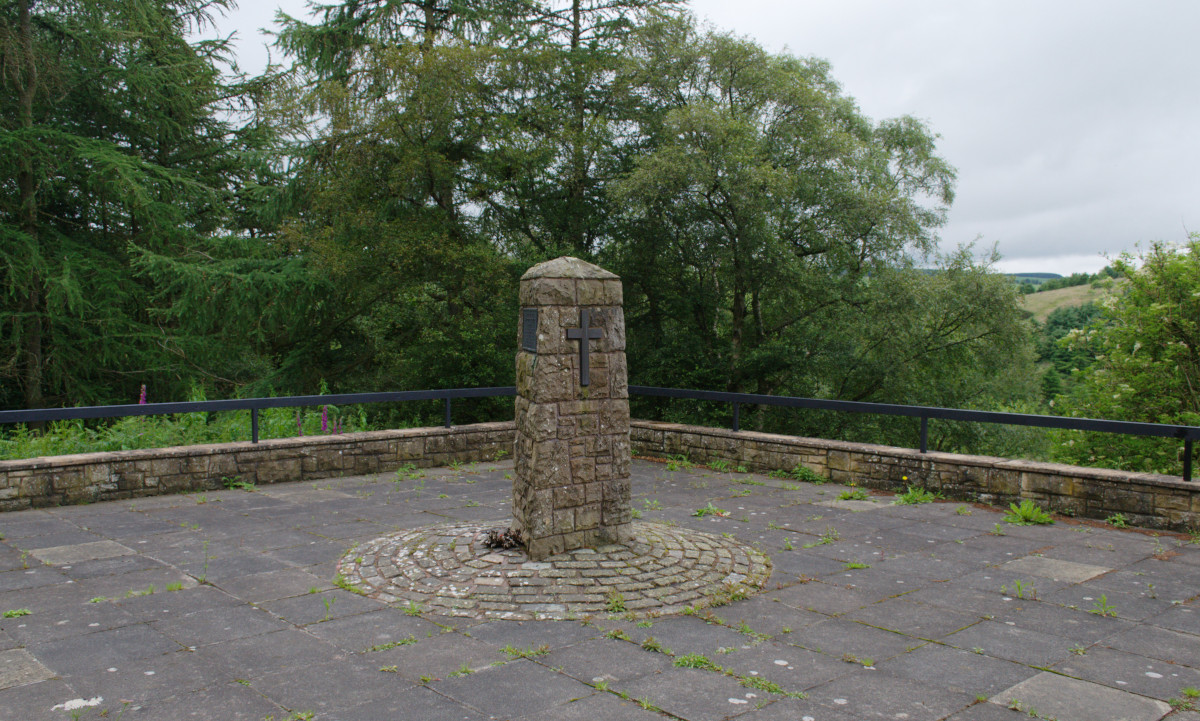 Whitrope Tunnel’s south portal. The collapse is just beyond the metal fencing.

Whitrope Tunnel is much further south, between Hawick and Carlisle. At 1,200 yards, it’s the longest of the lot. It also suffered a collapse, though not as serious as Penmanshiel’s. It is on the old Waverley Route – not on the section that’s being reopened, but apparently restoration work has been carried out in the area by railway enthusiasts. Update (September 2014): The reopening of the line from Edinburgh to Tweedbank is now in full swing, so Bowshank, Torwoodlee and Ladhope tunnels are now major construction sites. Neidpath Tunnel may also see some work in the near future, as there are plans to reopen it as a public footpath.