In part 2, I followed the route of the disused Glasgow Central Railway on its mostly underground journey from Kelvinbridge to Kirklee. Part 3 covers the same line in the other direction, from Kelvinbridge to Stobcross (well, most of the way to Stobcross… we didn’t go quite all the way for reasons that will become clear later on). This took us through the 950 yard long Kelvingrove Tunnel, one of Scotland’s longest and another one that had been on my radar for a long time. We also saw the much smaller St Vincent Crescent Tunnel, at the south end of Kelvingrove. We didn’t pass the remains of any stations this time, but the tunnels themselves had more than enough interesting features to make this a very satisfying explore. 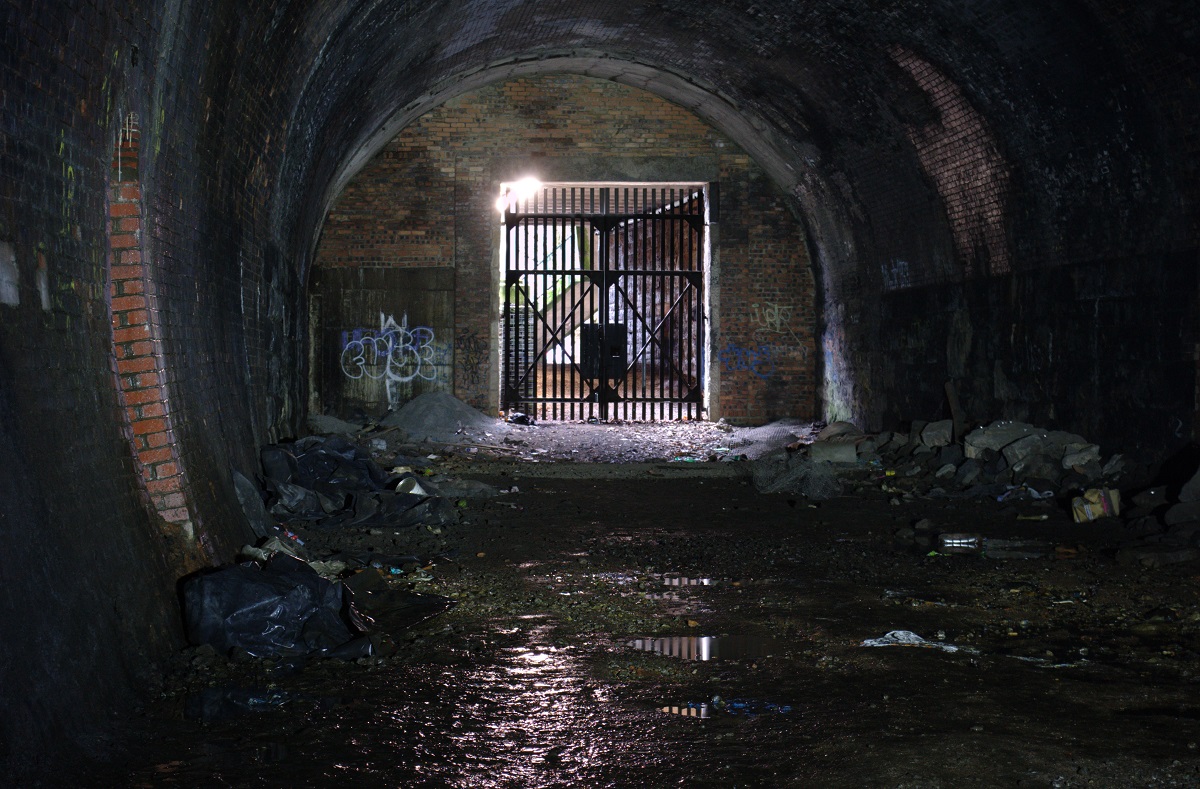 Kelvingrove Tunnel’s bricked up north portal can be seen near the River Kelvin, to the south of the former Kelvinbridge Station site. Most people who walk past here on the busy Kelvin Walkway probably have no idea they’re looking at the entrance to a 120 year old tunnel that runs right underneath Kelvingrove Park and surfaces the best part of a mile away to the south! 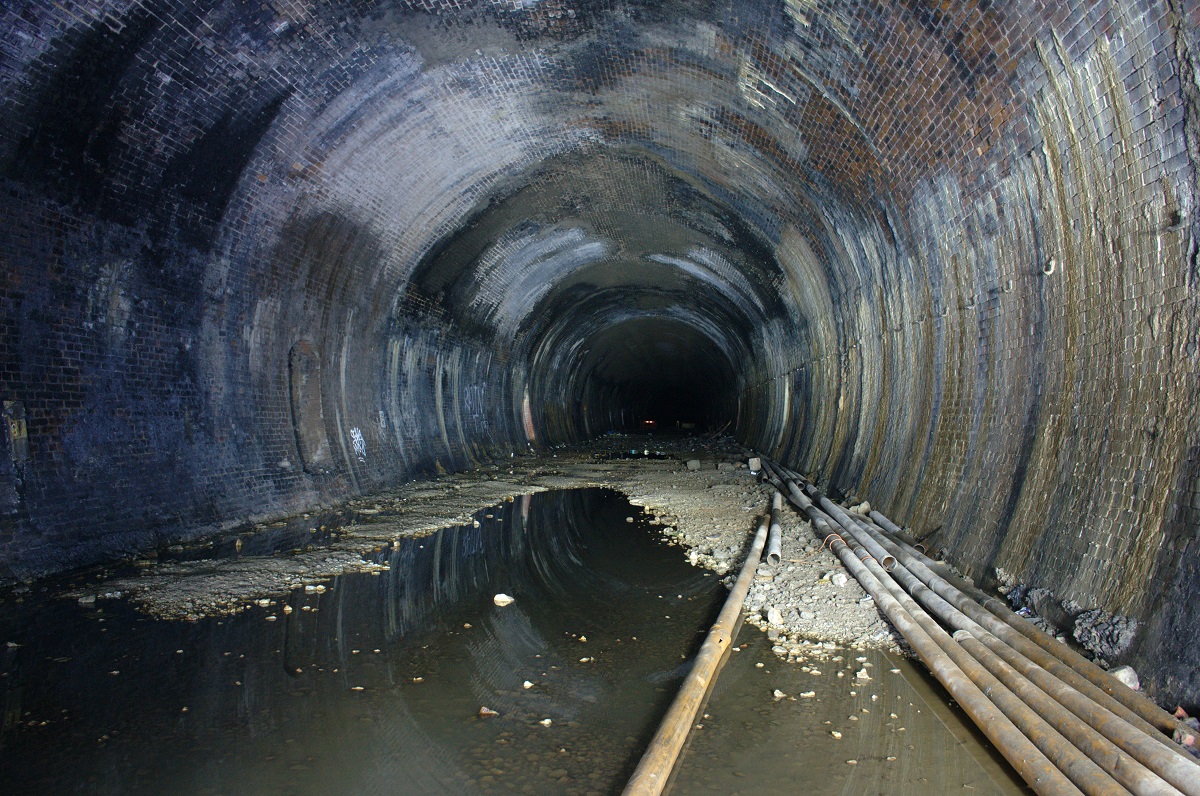 Inside, the tunnel is fairly wet but apparently nowhere near as wet as it used to be. This wetness caused major drama back in December 1994 when the River Kelvin burst its banks and water surged through the disused tunnels, eventually reaching the still-active part of the Glasgow Central line and flooding Central Low Level Station. Since then, remedial work has been carried out to prevent a repeat of this incident, including partially backfilling the south end of the tunnel, as well as putting in a higher bank outside the Kelvinbridge portal.

About halfway along the tunnel, the bore opens out briefly into a large square shaft, presumably a former ventilation shaft. It’s now capped off at the top and we were unable to find any trace of it on the surface (the tunnel is passing underneath Kelvingrove Park at this point). 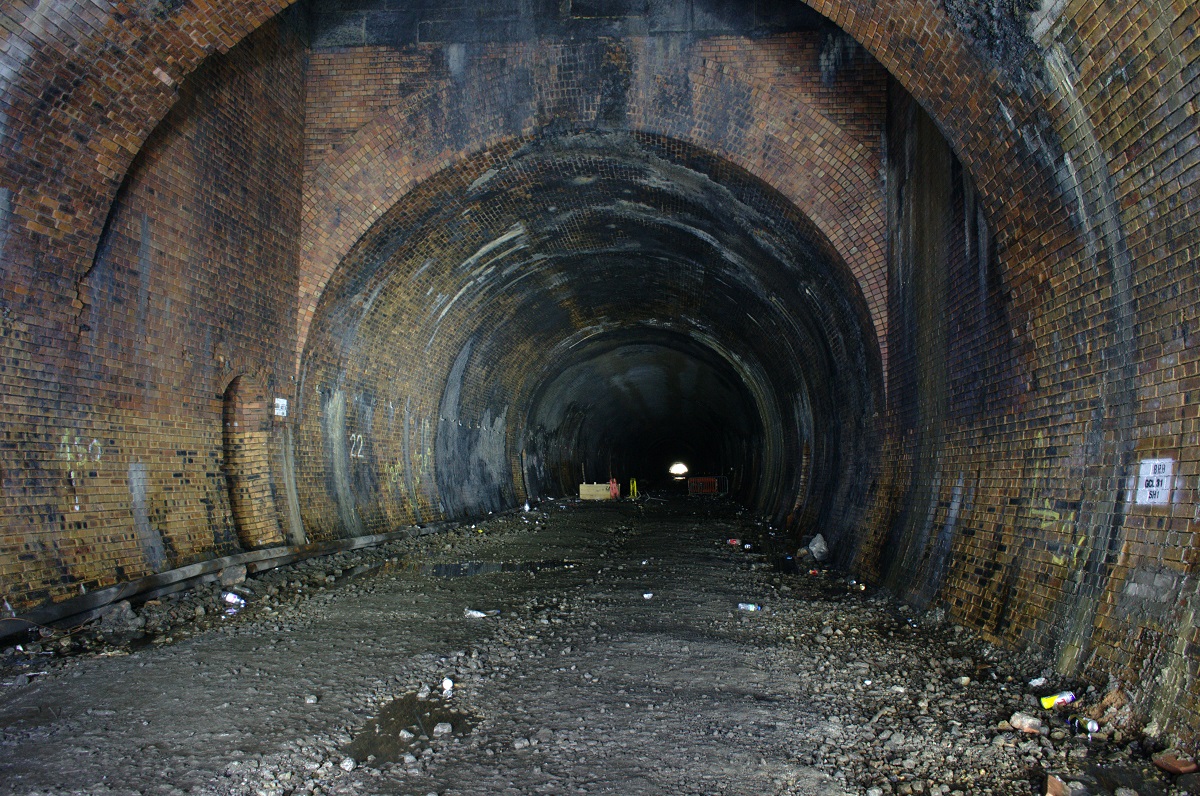 The photo above shows the view looking south with the shaft in the foreground and the light of the south portal visible in the distance. Apart from a bend at the north end, the tunnel is dead straight so the south portal can be seen from several hundred yards away. The wooden thing in the middle distance, surrounded by empty drinks cans, may be a relic from the days when the tunnels were less well secured and used to play host to illicit raves. Sadly, though, the incongruous sight captured by past explorers of two Ikea easy chairs sitting in the middle of the dark, damp, derelict tunnel is no more – we didn’t see the chairs at all on our visit, so they must have been removed.

Towards the south end, this old street sign (similar to the Bank Street one under Great Western Road) survives, though is now encrusted with the calcite that runs down the tunnel walls at this point. This confused us at first as we couldn’t find a street of that name anywhere near the line of the tunnel, but after some research it turns out that the western part of Sauchiehall Street (from Kelvingrove Street onwards) used to be called Sandyford Street until around 1900.

The south portal of the tunnel opens into a very short, steep-sided cutting. It’s been re-inforced with metal braces up above. The entrance to St Vincent Crescent Tunnel can be seen at the far end of the cutting. 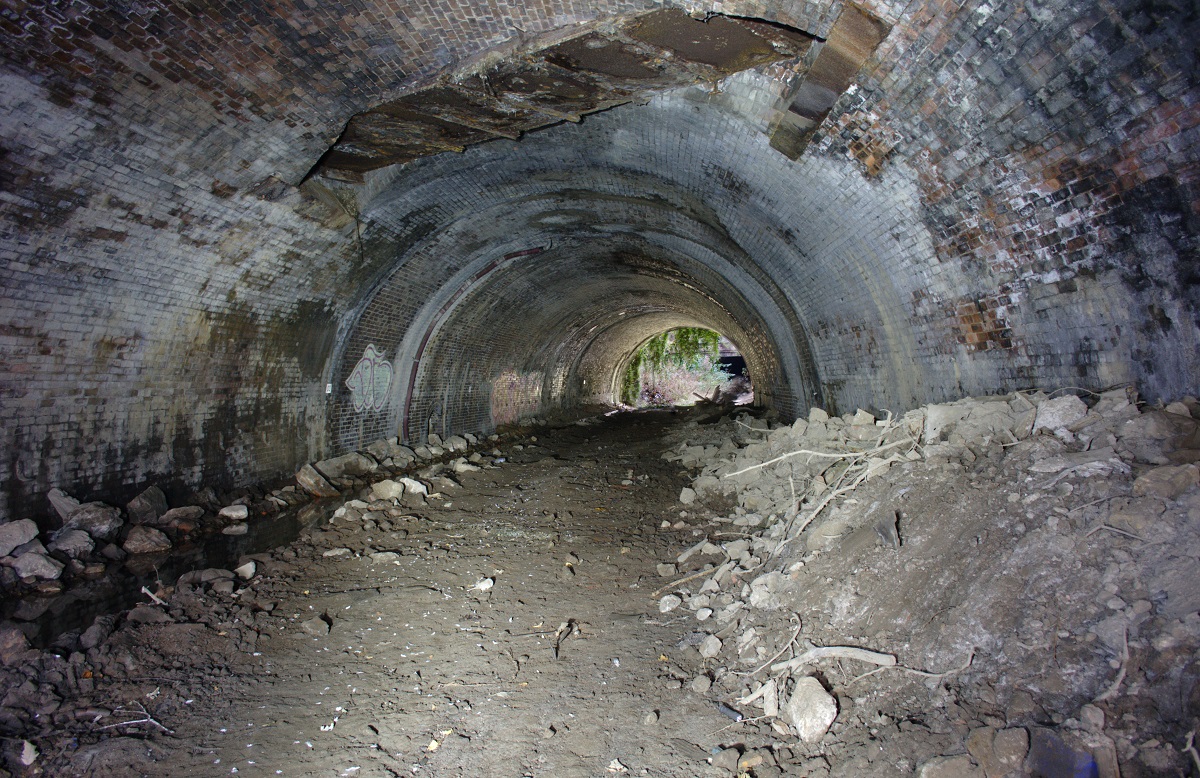 This much shorter tunnel, only around 80 yards long, takes the old line underneath the street of the same name. This whole tunnel (along with the south end of Kelvingrove) has been partially backfilled so the roof seems much lower than it originally would have. The roof is also crossed by two metal aqueducts, probably carrying sewers or water mains, one of which can be seen in the photo above. 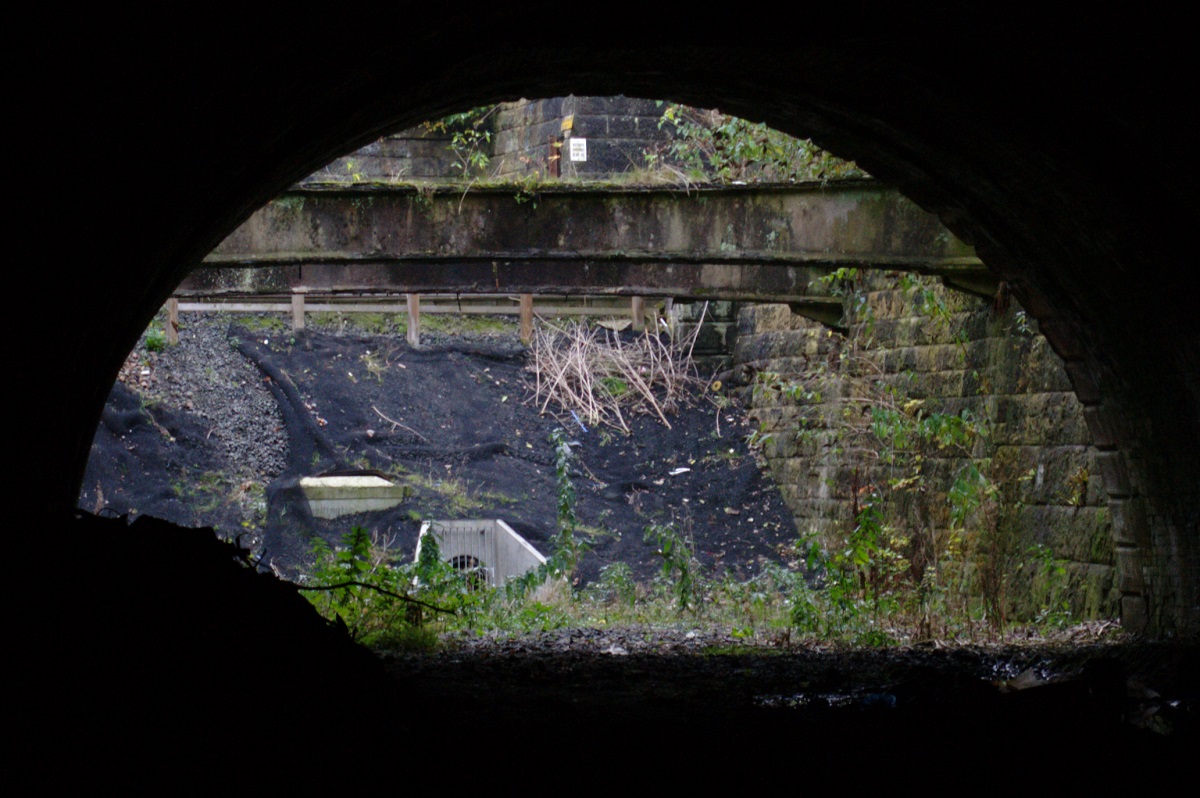 St Vincent Crescent Tunnel opens out into another short, steep cutting, but this was as far as we went – a live railway line now crosses the cutting on an embankment, and we had no wish to risk getting hit by a train or fined for trespassing on the tracks. Before the flood prevention works, the cutting floor was lower and there was a bridge here. At the far end of the cutting, the Glasgow Central Line enters yet another tunnel, the Stobcross Depot Tunnel. Inside this tunnel, the disused line joins onto the current Argyle Line (a section of the Glasgow Central Railway that was reopened in 1979), so I wouldn’t have entered that one even if the cutting wasn’t blocked.

On a more personal note, Kelvingrove Tunnel made me feel more uneasy than any other I’ve been in, mainly because of the noises – on the way in I was convinced someone was in there due to the loud clanking noises coming from up ahead, which turned out to just be drops of water falling onto a piece of discarded metal. Coming back out was even worse as we could hear voices and it sounded as if there must be people in the tunnel with us. Though we didn’t pass anyone, so either they went back out again before meeting us, or the voices were just filtering in from the park outside and sounding closer due to the weird acoustics in the tunnel. Anyway, it was all worth it to see this place!