I’ve been meaning to go look round Bangour Village Hospital for a while. Finally on Sunday, accompanied by Laura, Mari and Alex, I went.

Bangour was a psychiatric hospital that operated from 1904 to 2004. Since then it’s been abandoned and lying derelict. Walking around the extensive grounds is allowed, but you’re not supposed to go into the buildings themselves (though that doesn’t seem to have stopped the people who’ve posted numerous Youtube videos of the place).

On the way we grabbed a couple more geocaches: one in the woods just by junction 3 of the M8, and one by the bizarre Hollywood-style “Northwood” sign (I have no idea why that’s there. I must have driven past it but never noticed it before). Arriving at the hospital, the first thing we noticed was that it was much busier than we’d expected. The little “car park” at the entrance was almost full, mainly with people walking their dogs by the look of it, though later on as it started to get dark we saw some groups of teenagers arriving too. (I was also surprised how active the security patrols were, considering that the place has been completely deserted for years and presumably anything valuable will have been long since removed… we saw them driving around the site several times while we were there). 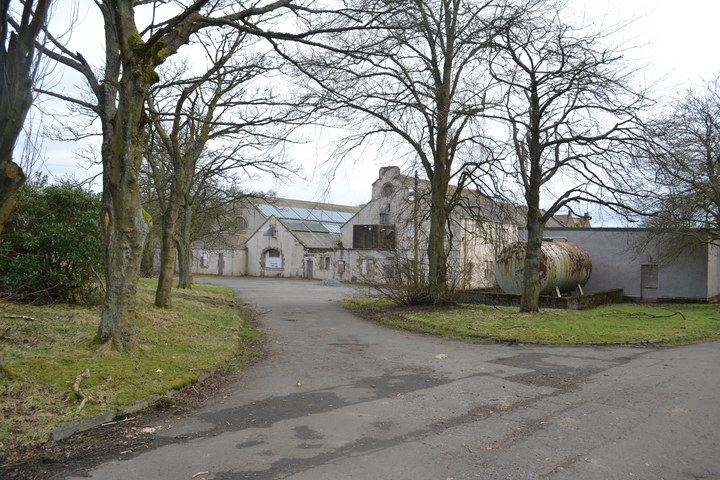 The place also seemed much bigger than it looked from the road or from the map. Everywhere we looked there were paths leading off into the distance, lined with decaying hospital buildings. We picked a direction and started walking. The first corner we visited seemed to be where most of the site services were; we saw a gardeners’ building, a transport workshop, the “Estates” office and the boilerhouse, broken and faded old wooden signs still identifying them. The buildings seemed to be mostly sealed up pretty tight, with plenty of forbidding warning signs, so there would be no getting inside without falling afoul of the “Breaking and Entering” laws. In places we could get a glimpse inside through gates or windows, though. 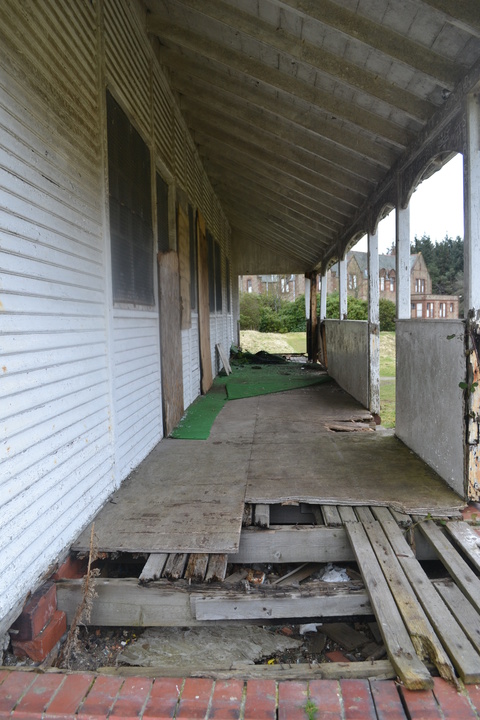 As we walked further in, we passed a wooden pavillion type building that was in an even worse state of repair than the others, and from there on in the buildings were more traditional old hospital style. I lost count of how many we saw, but there was a sign for “Villa 32” so there were a good number of them altogether. Most of them looked very much the same: boarded up, dilapidated, sad. The flocks of black birds that periodically flew out of the trees making forlorn noises added further to the desolate atmosphere. 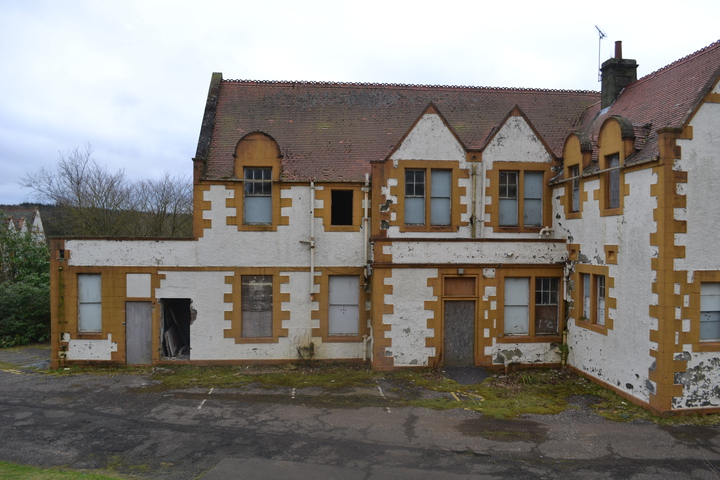 The weirdest thing we saw was at the building up at the back signposted as “Rehab Centre”. Outside it, through a broken fence and under a half-collapsed roof, was a table with chairs around it, on which sat empty beer bottles and a “Hungry Hippos” game (only three of the hippos remained, and only one of them still had a head). OK, that was probably brought in by some recent visitors rather than being leftover from the hospital’s working days, but it was still quite freaky to see. 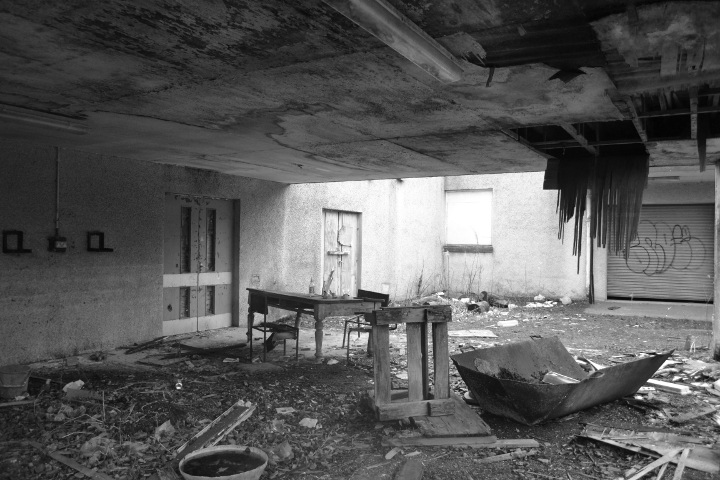 There was also the church in the middle of the site, which appeared to be in much better shape than most of the buildings. There was some sort of machinery operating next to it in a big blue box and hooked up to the building with pipes… possibly some minimal level of heating to keep it from deteriorating further. Although the welcoming text above the door still proclaimed “Friend, this house of God stands open for thee ever, that thou mayest enter”, the large padlock on the gate in front said otherwise. 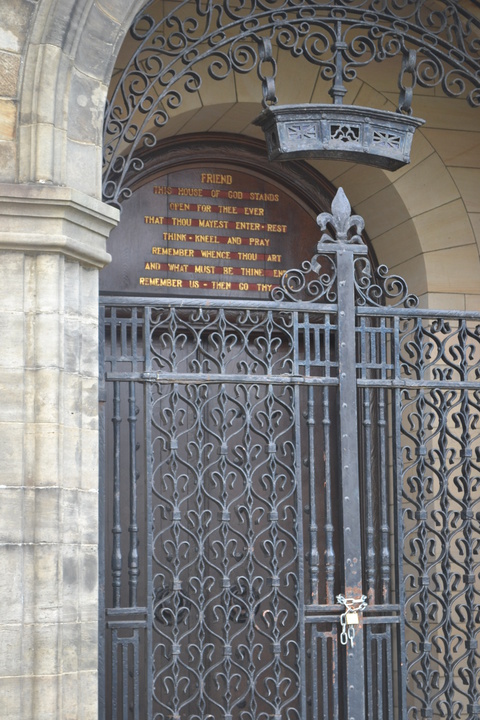 We didn’t find any buildings that we could have got into easily – there was an open skylight on one roof but I wasn’t feeling athletic – so we contented ourselves with taking photos through the few non-boarded up windows that were low enough to see in. Most of the rooms were fairly empty and uninteresting, sometimes with broken chairs and other abandoned items. One looked like a fairly complete hospital consulting room, still with blank forms lying on the desk! 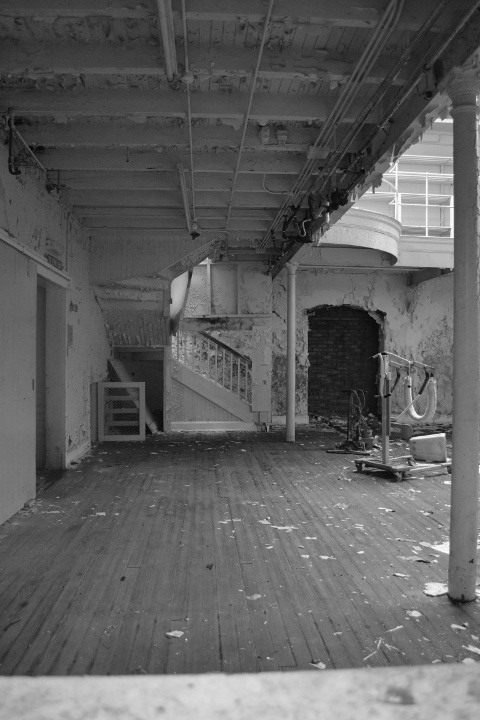 It took longer than we expected and we didn’t get round all the buildings before darkness started to fall, so a second visit might be in order at some point.

Apparently Bangour was used as the setting for a film called “The Jacket”, starring Keira Knightley. I haven’t seen it… but here is my “The Jacket II”, also shot at Bangour, starring Alex, and my body warmer with broken zip:

Epilogue: Although we didn’t experience anything paranormal while at Bangour, something a bit weird happened the night after in my flat. A cryptic message mysteriously appeared on my perfectly ordinary kitchen whiteboard: Note the ghostly grey shade of the text, in sharp contrast to the brightly coloured doodles around it, suggesting that it was not written by any whiteboard pen of this earth. I don’t know what it could mean… my current theory is that “Maz” may be a corruption of the ancient Celtic word “Mazinga”, meaning The Scary Ghost, and that this may be an attempt at contact from some entity that followed us home from Bangour. If you think you have a better explanation, please get in touch.

Update: see also this article about Bangour on Urban Ghosts Media, by my friend Sarah. You might recognise the pictures :).